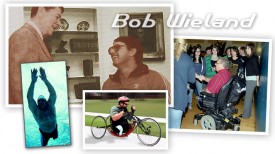 Bob Wieland, double-amputee, inspirational speaker, war veteran, marathoner, endurance cyclist and People magazine’s “one of the six most amazing Americans of the past 20 years,” will embark on the “Dream Ride 3” tour, a 7,000-mile cycle journey across America, this July.  With a hand–powered cycle, Wieland will cross America, stopping in major cities along the way to raise funds for charities, including the Los Angeles Dream Center, which Wieland has partnered with for this extraordinary tour.  The tour will begin with an official departure and press event at the Los Angeles Dream Center on Sunday, July 3, 2011 at 1 p.m. PDT.

With great inspiration from Dream Center Founder, Matthew Barnett’s recent book, “The Cause within You,” Bob Wieland has found his cause: to journey across the country to raise money for charities.  As a long time supporter of The Los Angeles Dream Center, Wieland seeks to raise funds for the center’s numerous programs that provide food, housing, clothing, education and job training to the inner city of Los Angeles.  Donations received on this tour will also support America’s wounded veterans. Says Bob, “I lost both legs, but I didn’t lose my heart!”

WHAT:  Official departure and press event to begin the “Dream Ride 3” tour, a 7,000 mile cross country cycle tour to raise funds for charity organizations including the Los Angeles Dream Center.

After losing both legs to a mortar mine while trying to rescue a fellow soldier during the 1969 Vietnam War, Wieland was inspired to become a marathon participant and motivational speaker.  He currently travels around the country sharing his message of hope and accomplishing incredible feats which have included “walking” across America on his hands, over three years’ time, to raise money for Vietnam War veterans.  In 1986, Wieland completed the New York City Marathon in four days and in 1988 he also finished the Los Angeles Marathon in 74.5 hours.

Wieland’s story is about an extraordinary modern-day hero and his courage has been recognized by many public figures, organizations, nationally televised programs and leading print media. President Ronald Regan has stated, “Truly Bob Wieland is an inspiration for us all.” The NFL players Association, in conjunction with the Jim Thorpe Foundation, presented Bob the National Award for Courage. He was also a strength and motivational speaker for the Green Bay Packers for two years and a former member of the President’s Council on Physical Fitness and Sports.

More information on Wieland and The Los Angeles Dream Center can be found online at www.dreamride3.com.

About The Los Angeles Dream Center

Founded in 1994, The Los Angeles Dream Center is a round-the-clock sanctuary for homeless families, addicts, abused women and children, victims of human trafficking, teen runaways, and many others. Through its numerous outreach programs, The Dream Center feeds over 40,000 people per month and houses more than 500 people daily, meeting them with love and a helping hand at their greatest point of need. The Dream Center provides food, housing, clothing, life skills training, education, job training and numerous resources through its 273 programs and outreaches.

Bob Wieland will visit the following cities on the “Dream Ride 3” Tour: