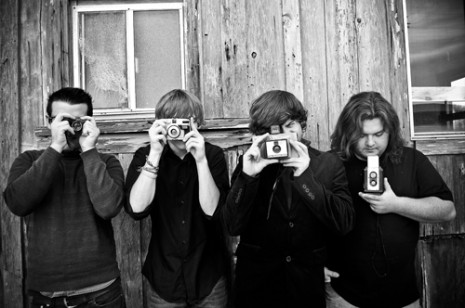 HM: Name 3 bands that, had they not released a certain album at a certain time, you would not exist as a band.
The O.C. Supertones “Chase The Sun”
Jimmy Eat World “Bleed American”
MxPx “Slowly Going The Way Of The Buffalo”

HM: If there wasn’t music, what skills would your members use and what would they do?
Matt Hagmann has much experience in the field of Korean pastoring, so I imagine he’d delve further into that realm. On the topic of realms, Matty Trett would most likely pursue a career in World of Warcraft guild administration, as he’s been the beloved leader of his current guild for quite some time now. Jason is a history buff; I could easily see him teaching some niche course on ancient Greek warfare tactics at a junior college or something. Me? I imagine I’d take over the role of NBC’s “Chuck”, from Zachary Levi.

HM: When asked to describe your band by comparing yourself to others (the dreaded “Recommended if you like” question), who would you list?
The O.C. Supertones, Weezer, Less Than Jake, Jimmy Eat World, Something Corporate

HM: What’s a secret or little-known fact about your band (or one of your band members) that would make you the darlings of the music world if we all knew it?
In the 4th grade, as the majority of our peers were concerned with Limp Bizkit, Sisqo and The Spice Girls, we were chiefly focused on starting a Christian Ska band.

Also, our good friend Derek Booth looks like Robert Pattinson, he roadied for us on a tour, once.

HM: If there was another band and another album that you could give everyone as a present for Christmas, what album would that be? Why?
Bleach “Astronomy”, it’s a great album and a real picker-upper. The sound of this album brings us back to a better time in the world of music.

HM: What is one belief, conviction, idea, or passion that you honestly think might’ve been deposited inside you or given to you by God?
We all feel we’ve been given a passion for ministry through music. Music has the power to change a person’s mood, inspire, depress, encourage, and communicate ideas. God has immensely used music in our lives and relationships with Him.

HM: What’s one of the most memorable things (either good, bad, or funny) that’s happened at one of your shows?
Rock Of Ages Festival, a few years back. It was pouring rain and they had to shut-down the stages for a good 30 minutes or so. We were scheduled to play on the indie stage, and it seemed the rain would keep us from doing so. This was our first festival ever, and we were crushed at the thought of having our slot cancelled. 3 minutes before our scheduled set would begin, the rain stopped. We rushed the stage, plugged in the amps, and played a show, sopping-wet…for a massive crowd of equally wet fans and friends. Though uncomfortable, it was rather intense and looked really cool on camera later.

HM: If you had a chance to perform for most of the televised world and play just one song, which song would you play, and why?
“Africa” by Toto, truly, one of the most beautiful songs ever penned by man. Having a rough day? (slaps on the Toto jams) No, not anymore.

HM: If a super surgeon removed all of your emotions and the ability to feel any emotion for the rest of your life, which one or ones would you most want to have back? Why?
All of them? For as volatile as our emotions might be, life would be pretty boring without them.

HM: If you could ask God one question, what would you ask Him?
Is He going somewhere, that we wouldn’t be able to ask Him questions whenever we wanted? I’m not sure we could ask just one question…I feel like each solitary answer would lead to another question. (kinda like “Lost”).

HM: What’s the best video on Youtube (like, if our readers had to type in a word or a few to search it, what would the keywords be?)??
Asian Travis Barker.

HM: If someone came to you and said, “Hey! I need to make some changes in my life…Help me out! I’m going to take one piece of advice from you and apply it to my life and/or make it a habit for 30 days. What would that piece of advice be?”
One piece of advice…man, that’s hard to narrow down. What about: go outside/read your Bible/find a good multi-vitamin/workout/love somebody/go to shows/talk to God/play a video game…that’s one run-on piece of advice, right?

HM: In 4 sentences or less, explain how your band came to exist. (and give us a date)
(In 1996, Tom Hanks released a film called “That Thing You Do”, which chronicled the career of the fictional 60’s pop band, “The Wonders”, and their rise to fame…..fast forward 6 years…) Sunday June 9th, 2002. Sitting at our local Chevys, here in Sunny Fremont CA, our parents discussed how cool it would be if we started a band. We tried to think of the most brutal, yet Biblical, name we could find…and we decided on Blood and Water. To this day, kids still come out to shows, thinking we’re a screamo band.

The band is based in Fremont, CA (20 minutes from San Francisco).

“Torpedo!”(2005) – a 6 song demo we recorded in a garage and sold to our friends.
“Nothing To Lose”(2006/07) – our first EP…recorded in an abandoned chicken/egg processing plant from the 70’s, but that’s a story for another time.
“Coming Back”(2007) – our attempt to make a worship album. Our first time working with Aaron Madsen, our good friend and producer extraordinaire.
“Self-Titled”(2008) – our first official release and LP. With this record, we went on our first couple tours, met our label (Eden Records), and experienced some mild radio play. Good times.
“In Character”(2010) – our 2nd LP and first release through Eden Records. We got to work with a hero of ours Masaki Liu (Five Iron Frenzy, The W’s). July 13th, 2010!

HM: What is the release date of your next (or latest) album? Or what is the next big date on your band’s calendar?
We release our newest LP “In Character” on July 13th, 2010. We are super proud of it.

HM: What’s one question you’d always wanted to be asked in an interview? (and please provide your answer)
Q: If your band released a live album, what would it be called?
A: “LIVE from the Smash Club!” The art and band shots would be themed around Jesse & The Rippers and other Full House paraphernalia.