Blessed by a Broken Heart Interview 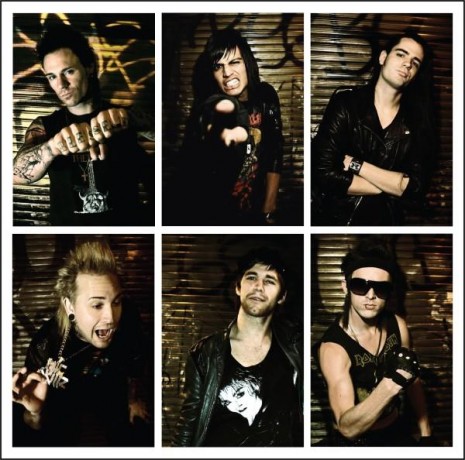 HM: If your band was not around and you could be in any band, what band would you be in?
Tony: Oh man, what I would give to be in Journey or Stryper. That would rule all…

HM: What is your opinion on the whole “Christian band” label?
Tony: Well, we have tried our hardest not to market ourselves as a Christian band, simply because it will limit the amount of people you reach with your music. We want everyone to listen to us, Christians, Buddhists, and Satanists, anyone who loves music. We have a good message, and that message is for everyone. We just happen to deliver that message with sweet rock music!

HM: What is your favorite venue to perform in?
Tony: I can’t say that I have one favorite venue. But any club with a good stage, good sound, and a packed crowd will do. I love when venues have tons of lighting trussing that I can climb and do flips off of. haha

HM: If you were not making music, what would you be doing?
Tony: I would be traveling the world with my family. Probably move somewhere tropical. And, I would be doing photography full time. www.tonygambinophoto.com

HM: Which of the bands on this tour is creating the most laughs amongst the whole entourage?
Tony: Well, we haven’t quite started the tour yet. But I can imagine the dudes from A Plea for Purging are hilarious dudes. I’m really looking forward to chilling with them more..

HM: What are your thoughts on how your music is actively influencing the culture around you? Partly because bands like yours are not just stuck behind the four walls of some youth group church room. You’re playing out in clubs, etc. Also partly to blame are people in the world opening up their minds to listen to Christian bands…
Tony: I love being able to influence so many people and cultures around the world. I honestly didn’t think I would have the opportunity to do such a thing. It’s a huge blessing. Its rad when you see 50 year old metal dudes rocking out to us just as hard as the 17 year old hardcore kid.

HM: What is one or two pieces of gear, gadgets, etc, that you have to buy all the time? (like batteries, tuners, strings, whatever…). I’m particularly interested in the things that you didn’t plan for, that were surprises…
Tony: How about pants? I rip so many pants, it’s insane. I’m pretty active on stage, from flipping off the drum riser to stage diving constantly. Pants go fast. And those are pretty important gear if you know what I’m sayin’. And, we have to replace Sean’s amp about 3 or 4 times each tour. He shreds harder and plays louder than anyone I have ever known…

HM: What do you think is going to happen with this current generation?
Tony: I don’t really know, I can just imagine that its going to get harder and harder from here on out until the end.

HM: What do you hope people come away with from the experience of seeing this show?
Tony: I know they will walk away saying that was one of the most rad shows they have ever seen. I hope they open their hearts to the message in our music.