Battle of the Bands contest (another one) 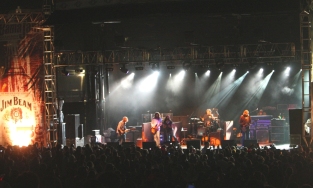 Talent from near and far now has the opportunity, with the help of Verizon Wireless BamaJam Music and Arts Festival’s Jim Beam Battle of the Bands 2010, to perform for crowds like those for platinum selling artists, plus the chance to have a song produced by one of Nashville’s most successful producers, James Stroud, whose credits include more than 125 No.1 records and albums that have collectively sold over 52 million copies worldwide.
The Jim Beam BamaJam Battle of the Bands competition is open to all and will afford six finalists the opportunity to perform a 30-minute set on Stage D at Verizon BamaJam 2010 in Enterprise, Al. Finalists will be judged by a panel of top-music industry professionals based on a set of criteria including marketability and talent.

“To participate in Verizon BamaJam on any level is among the most valuable experiences an artist can have,” said Trey Wilson, Vice President of Live Entertainment, Ronnie Gilley Entertainment. ”All six qualifiers will have a chance in the spotlight at Verizon BamaJam and one winner will have the experience of a lifetime with industry icon James Stroud producing a track for them.”

Applications for the 2nd annual Jim Beam BamaJam Battle of the Bands may be submitted online at www.bamajammusicfestival.com from now until Wednesday, April 21. The selection committee will review submissions and announce six finalists on Monday, April 26.

The 2nd annual Jim Beam Battle of the Bands winner will be announced LIVE Saturday, June 5, 2010 at the Verizon Wireless BamaJam Music and Arts Festival.
Since being featured at last year’s event, Atlanta-based group, Blackberry Smoke, has signed with BamaJam Records. They reached No. 3 on CMTs PURE COUNTRY Countdown and have been featured in music magazines such as Country Weekly and Strum Magazine.
With more than 40 top artists anticipated in the festival lineup, Verizon Wireless BamaJam Music and Arts Festival offers three days of non-stop activity, from concerts to camping, for tens of thousands of fans from around the world.  The 2010 lineup already includes:

Tickets to see all performances including the more than 40 artist lineup are available online at www.ticketmaster.com or by phone at 800-745-3000.

About Verizon Wireless BamaJam Music and Arts Festival
The Verizon Wireless BamaJam Music and Arts Festival is a 3-day/3-night music extravaganza on June 3 – 5, 2010 created to celebrate the human spirit through music and arts and to provide financial support to help serve the needs of the people of Coffee County and the surrounding area. Verizon BamaJam is a Country Music festival that blends in Bluegrass and Alternative bands to provide diverse artist lineups.