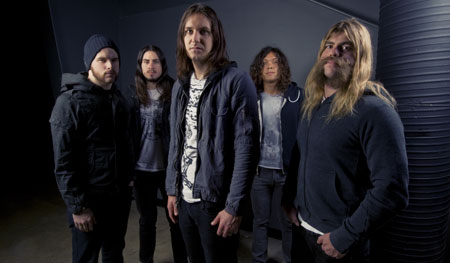 San Diego CA Grammy® nominated metal outfit As I Lay Dying are pleased to announce the title of their upcoming, 5th full-length album (4th for Metal Blade) as The Powerless Rise. The band is currently finishing up recording of The Powerless Rise in San Diego with producer Adam D. (Killswitch Engage). Fans can expect The Powerless Rise. to be released this spring with plans for a headline tour also slated around the same time. More information on the tour and the street date for The Powerless Rise will be made available in the coming months.

In other news
THQ Inc. today announced it will partner with Metal Blade Records recording artist As I Lay Dying to offer consumers an exclusive opportunity to connect with the band using MX vs. ATV Reflex, the latest addition to the popular off-road racing franchise. On Thursday, February 4 at 8:00 p.m. ET/5:00 p.m. PT, As I Lay Dying band members will log in to the Xbox LIVE® online entertainment network for the Xbox 360® video game and entertainment system from Microsoft to compete against fans using the Gamertag AILDband. The consumer gameplay challenge is expected to last for approximately two hours.

MX vs. ATV Reflex offers players a high energy, explosive gameplay experience that lends itself well to the inclusion of heavier music, said Victor Rodriguez, Music Director, THQ. The music quality and prominence of As I Lay Dying in this genre made the band a great match for the game.

If any gamers out there are looking to get their butts kicked in MX vs. ATV Reflex, well be ready and waiting for you on February 4, said As I Lay Dying guitarist Phil Sgrosso. We shall conquer all those who challenge us, so prepare to meet your doom!

The Sound of Truth, featured on As I Lay Dyings critically and commercially acclaimed release, An Ocean Between Us, appears on the in-game soundtrack to MX vs. ATV Reflex and is featured in the games promotional TV campaign. The bands new album, The Powerless Rise, is currently being recorded in San Diego, Calif. with producer Adam D. (Killswitch Engage) and is scheduled for release in Spring 2010. Plans for a headline tour are also slated for Spring 2010.

More information about MX vs. ATV Reflex can be found at www.mxvsatv.com.

About As I Lay Dying
The members of San Diego, Calif.s metal act As I Lay Dying are the kind of musicians who refuse to be measured solely by their most recent accomplishments. As I Lay Dying are not afraid to push the limits of their sound and always keep things moving. Their music grabs listeners by the throat and doesnt let go. Building upon the foundation that As I Lay Dying has laid over the past several years, growing from a small San Diego outfit slowly and deliberately into a priority national act, the band has become Metal Blade Records biggest seller with an extremely devoted following. As I Lay Dying has the goods to take it all the way and stake their claim as the metal band you need to know about in 2010 and beyond.

The bands last release, An Ocean Between Us, landed the #8 position on the Billboard Top 200 charts its first week out, making it the highest rock debut on the chart that week. An Ocean Between Us stayed in the Top 40 Charts its second week out in the United States and Canada, charting at #39 in both countries. The bands first-ever DVD, This is Who We Are, entered the Billboard Top Music Videos Chart at the #2 position in the US and the #3 position in Canada. The DVD is also certified platinum in the United States and Canada by the Recording Industry Association of America (RIAA). In addition, 2008 saw As I Lay Dying earn a Grammy® nomination for Best Metal Performance for the single Nothing Left.

As I Lay Dying have appeared on many significant hard music festivals around the globe, including Sounds of the Underground (headliner), Taste of Chaos, Ozzfest, Wacken, Cornerstone, Bamboozle, the New England Metal & Hardcore Festival and Sonshine. The band has also completed multiple headlining runs in the United States and Europe, along with dates in Australia, Japan and Indonesia.