AMISH GRACE THE REMARKABLE TRUE STORY ABOUT THE POWER OF FORGIVENESS 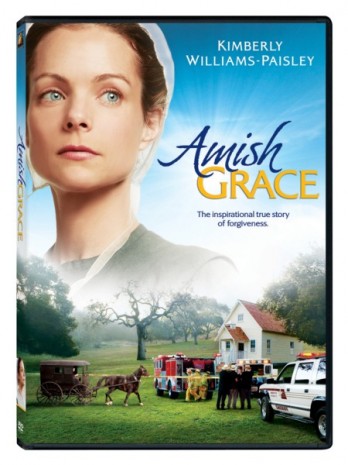 We will not allow hatred into our hearts… it not only goes against God’s will,

it becomes a corrosive force that further compounds the original anguish.” – Amish Elder

The highest rated movie ever to premiere on Lifetime, Amish Grace arrives on DVD today, September 14 from Twentieth Century Fox Home Entertainment.  Based on a true story and the book Amish Grace: How Forgiveness Transcended Tragedy by Donald B. Kraybill, Steven M. Nolt, and David L. Weaver-Zercher, Amish Grace chronicles the community of Nickel Mines, Pennsylvania, forever changed when a gunman senselessly takes the lives of five girls in a schoolhouse shooting before taking his own life in October of 2006.  What transpires takes the town by storm, as the media descend on the city and criticize its Amish leaders for their notion of unconditional forgiveness and their outreach of support to the gunman’s widow.  Through the eyes of a grieving mother, Ida Graber (Kimberly Williams-Paisley; Father of the Bride films, “According to Jim”), and other devastated families, the film explores the Amish community’s astonishing reaction of compassion to the horrific events that shook their town and tested their faith.

Directed by Gregg Champion (“The Magnificent Seven”), Amish Grace premiered on Lifetime to over four million viewers and also stars Matt Letscher (“Brothers & Sisters”).  The DVD will be available for the suggested retail price of $22.98 U.S.  Pre-book is August 18.

Twentieth Century Fox Home Entertainment, LLC (TCFHE) is a recognized global industry leader and a subsidiary of Twentieth Century Fox Film Corporation, a News Corporation company. Representing 75 years of innovative and award-winning filmmaking from Twentieth Century Fox, TCFHE is the worldwide marketing, sales and distribution company for all Fox film and television programming, acquisitions and original productions on DVD, Blu-ray Disc Digital Copy, Video On Demand and Digital Download. The company also releases all products globally for MGM Home Entertainment. Each year TCFHE introduces hundreds of new and newly enhanced products, which it services to retail outlets from mass merchants and warehouse clubs to specialty stores and e-commerce throughout the world.