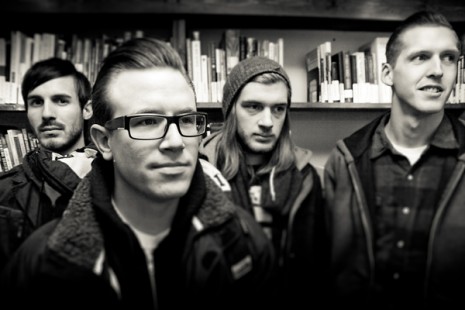 While Advent by definition means an arrival of a person or event, this band arrived before they even formed. That is because the majority of the members of this hardcore band were initially a part of another hardcore act, the revered underdog of a band, Beloved, until their untimely break up in 2005. But, being a part of such a well-respected band in the hardcore scene has not made the now-members of Advent feel bigheaded or entitled. In fact, all of them still work part-time jobs in their hometown in North Carolina, because their band still does not make them enough money to financially support themselves.

“I mean two of us are married, we’ve got mortgages and all that kind of stuff. So we don’t really make enough money to do this full time so we just do it when we can and the day after we get home (from touring) we go back to work,” bassist Johnny Smrdel explains.“Chris, our drummer, and myself work at this grocery store Whole Foods Market. Mike the guitar player, he works part time at Whole Foods and Joe our singer, he works at a locally run music store. It’s weird, but even in the Beloved days with Joe, Matt and I, even though Beloved toured, we never made enough to not have to come home and not have to go to work. So these past seven or eight years of our adult lives…it has always been a sacrifice, you know? Thankfully we all have jobs that we don’t hate. I mean, I have free health insurance. You can’t really complain. When it comes to our tours, we play as hard as we can because we don’t get to do it that much. We’re thankful for it.”

Because they cherish the opportunity to play music so much, Advent waited a full three years after the break-up of Beloved to release their debut album, Remove The Earth, even though the band essentially formed weeks after Beloved’s demise. This was also largely due to the fact that they carefully took the time to find a drummer that fit well with the band.

“When we first started it was just Joe, Matt and I and that first year and a half we did basically four shows because if we got offered a show, we had to have someone learn the drum parts, and another guitar player to learn the guitar parts,” Johnny said. Often the band used Classic Case guitarist Mitch Marlow and Glass Casket/Between The Buried and Me drummer Blake Richardson. “So that whole process of figuring out what type of band we wanted to be, getting a full band together, getting the label worked out and into it, it took forever it seemed like. So in those two years we wrote a lot of songs, threw a lot of crappy songs away, and then recorded. We finished recording that record in the end of August of 2007 and then seven months later it came out. So it was definitely a process and sometimes I’d say it was a pain in the butt, but it was all worth it.”

After the release of their first album, the band went full steam ahead into their more darkly dwelling second release, Naked and Cold, just released this past September.

“In this album, it is a lot thrashier. The songs are a lot faster. We just tried to bulk up everything as much as we could,” Johnny exclaims.“The hard parts we wanted to hit harder, the fast parts we wanted to be faster and more angry, the lyrics we wanted to be even more clear on where we stand, on our faith, on politics, on hardcore as a scene in general. If you look outside or turn on the TV, every single place is getting colder and colder as each year goes on. There is war in more than half the world, there’s people being killed for oil, for people, their faith. This just kind of sums up that feeling of, when you look outside, this world is naked and cold. There is nothing out there in the world that is going to stand the test of time. It is all falling and fading.”