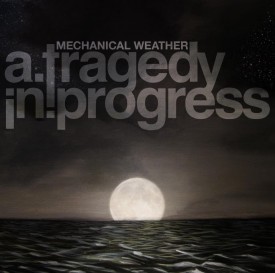 A Tragedy In Progress has made another track, “Better Left Alone,” off their upcoming album available for streaming at http://youtu.be/BFZAgbidh4Y. The album, entitled Mechanical Weather contains 13 songs that were tracked at Echelon Studios with Joseph McQueen. The record hits stores and online through Indianola Records August 28th .

Formed in 2010, A Tragedy in Progress is the complete and original line up of Across Five Aprils. The band had reunited for a series of reunion shows that year when they decided to write some new songs under the name of the band’s first record A Tragedy in Progress. Eventually this led to long time Across Five Aprils collaborators Indianola Records releasing the 2011 EP Going Down With The Ship.

Guitarist Jason Fields recently commented during an AtlSounds interview on what listeners can expect from this full length effort: “I feel like it’s a solid record start to finish. A lot of records have high points and a lot of filler in between. I feel like our record is strong throughout. Across Five Aprils fans will hear things that are indicative of this lineup and our chemistry, but they will hear better crafted songs with a more mature sound. That being said, I believe and hope a new listener would enjoy it just as much”

The band has previously released “The Human Condition” off Mechanical Weather here http://youtu.be/FUB0igQLwrY