Atlanta-based ’68 has announced July 8 as the firm release date for their debut LP, In Humor and Sadness. The band features Norma Jean and The Chariot founder Josh Scogin and drummer Michael McClellan.The band will also hit the road supporting Listener on the “I Went on Tour and All I Got Was This Tour” Tour, also featuring the Homeless Gospel Choir. For dates, check out the image below. The band recently finished up a support gig touring with Chiodos. 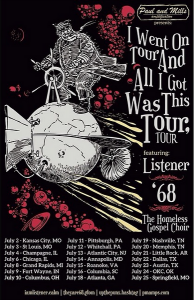