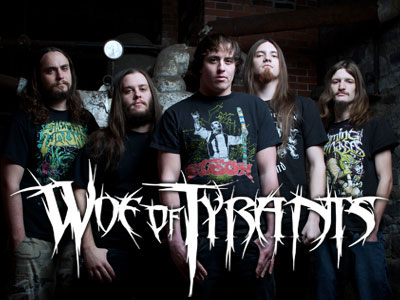 Woe Of Tyrants spent the entirety of 2009 criss-crossing the US on a multitude of tours. After the grueling schedule came to a close, did they head home to rest and take some time off? NOPE! They dove right into songwriting for the follow up to their sophomore album and Metal Blade debut, Kingdom Of Might. This time around, the guys have seriously turned up the shred-knob and churned out some of the most exciting songs we’ve heard swirling around the Metal Blade offices in quite some time. On this record, you’ll find equal parts speed, groove and over the top guitar soloing. Headbanging will be mandatory.

The new album, Threnody, will be released worldwide on April 13th while the band will be on the road with Overkill and Vader. The artwork and first track will be up on the band’s myspace, myspace.com/wot, in the coming weeks. Before then, SiriusXM Liquid Metal listeners will be treated to an exclusive premiere of the first single, Creatures Of The Mire on Friday, February 12th.

Vocalist Chris Catanzaro discusses the themes of Threnody:
Well 2009 proved to be a monstrous one for Woe of Tyrants. It was a year of accomplishing goals such as releasing our debut Metal Blade album, touring with bands we’ve grown up listening to, and meeting thousands of awesome people all over the country. As we embark into 2010, our goals have shifted up a few gears. We have a brand baby spankin’ new record that we finished recording at the end of 2009 with Jamie King producing, and to embrace the cliché “this is the most epic brutal stuff we’ve ever done and we’re stoked on it!” The album is entitled Threnody. Now for those of us who do not know what that word means right off hand (I had to look it up as I was reading a passage from Ralph Waldo Emerson long ago), a threnody is a song or hymn inspired by the grief of losing someone you love. The album tells a story of a non-specific individual traveling between planets searching for answers, while paralleling Satan’s fall from grace to damnation at the same time. We all experience a change at some point as we travel through life, albeit not of the same magnitude as Lucifer, that will render us either content, or disgusted. When disgust is the feeling, then we begin to miss our former self as if they were an entirely different person. I’d like to be clear that I’m not referring specifically to Christians, or Muslims, or Amish or whatever else the kids are doing these days. Threnody, as we are using it, is a story of grief over losing oneself. This album will surprise those familiar with our band, and hopefully surpass any preconceived notions of those who are listening to us for the first time. If you have expectations for this record to sound like our last two albums, it doesn’t. Well, a little like the others, as we still prefer playing leads over doing breakdowns, and we still wish we were Wintersun or Decapitated. But for the most part, this record is new territory for us and we are excited to unleash it.

We have a huge touring schedule kicking off in the spring, preceded by some regional shows in February as a part of the “Metal as Art” tour with Hypno5e, Starring Janet Leigh and Fallen Martyr. At the end of March, we leave on the KILLFEST tour which features Overkill, Vader, God Dethroned, Warbringer and Evile. We couldn’t be happier about being involved with such an epic tour, and to join Overkill on their 25th anniversary tour is truly an honor. Much love!”