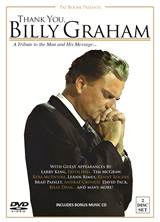 Now, in a one-of-a-kind biographical tribute, some of the world’spremier entertainers, from Larry King to Reba McEntire, come together to pay respect to this American hero through personal testimonials and the joining of their voices in a multi-artist,anthemic performance of “Thank You, Billy Graham.” The project was written and produced by motion picture actor and recording artist Pat Boone, Grammy-winning Rock artist David Pack from the critically acclaimed band Ambrosia, and Grammy® winning Country singer-songwriter Billy Dean.  Special features include hours of interviews and in-studio footage condensed down into a documentary style, behind-the-scenes look at the making of this heartfelt tribute to the life and ministry of Reverend Billy Graham.

“This is a once in a lifetime celebration for a humble giant who has devoted his life to serving God and humanity,” says David Pack, the tribute’s producer and co-writer.

Since he was ordained in 1939, Graham has preached to nearly 215 million people in more than 185 countries, and led hundreds of thousands of individuals to make personal decisions to live for Christ, which is the main thrust of his ministry.  His counsel has been sought by presidents and heads of state, and he has received numerous awards, including the Congressional Gold Medal.

Over 100,000 ministers have trained under his spiritual tutelage, and Graham has been preaching at White House services since FDR was president.  His stadium sermons are legendary and only ended recently due to the world-famous preacher’s frail health.  Graham’s wife, Ruth Bell Graham, died in June, 2007 following a lengthy illness.

“He would not want to hear it, he’s such a humble man,” says Boone.  “But around the world, we need to say it:  Thank You, Billy Graham.”

A portion of the proceeds from the Thank You, Billy Graham project will be donated to Franklin Graham’s Samaritan’s Purse and Mercy Corps, two charities that support humanitarian relief throughout the world.

Today, at age 93 (Rev. Graham will celebrate his 94th birthday November 7th), he is still widely recognized for his humanitarian work around the globe and the work of his foundation, The Billy Graham Evangelistic Association.   Graham’s son, evangelist Franklin Graham, serves as President and CEO of the BGEA.

Worldwide and North American distribution of Thank You, Billy Graham through all traditional and online retailers is via Allegro Media Group (https://www.allegro-music.com/)

To listen to the song “Thank You Billy Graham” please visit:http://www.GoldLabelArtists.com/media.