The Strange Case of Alice Cooper to release on DVD 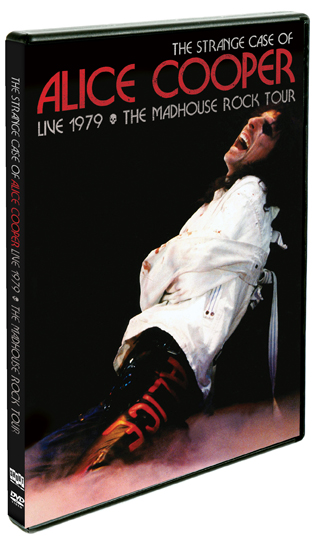 The Strange Case Of Alice Cooper

Available for the First Time on DVD May 22

Unavailable and unseen for more than 30 years, Alice Cooper’s macabre masterpiece The Strange Case of Alice Cooper will be released on DVD for the first time on May 22, 2012 from Shout! Factory.

The Strange Case Of Alice Cooper is more than a concert film. It is the warped tale of one man’s descent into madness, a theatrical rock ’n’ roll spectacle that could only emerge from the twisted imagination of Alice Cooper.

Recorded live on April 9, 1979, in San Diego, California during a stop on the Madhouse Rock Tour, Strange Case was inspired by Alice’s stay in a New York sanitarium and the people he encountered there. Vincent Price introduces the proceedings as ghoulish doctors and transvestite nurses cross paths with dancing bottles of alcohol. All the while, Alice performs songs off his album From The Inside, as well as many of his most well-known and best-loved hits.

A must-have for fans of Alice Cooper and rock music alike, Strange Case will be available  in stores nationwide with a suggested retail price of $16.98. The DVD also features an audio commentary by Alice Cooper.

Welcome To My Nightmare

Wish I Was Born In Beverly Hills

How You Gonna See Me Now

Shout! Factory is a diversified entertainment company devoted to producing, uncovering and revitalizing the very best of pop culture. Founders Richard Foos, Bob Emmer and Garson Foos have spent their careers sharing their music, television and film faves with discerning consumers the world over. Shout! Factory’s DVD offerings serve up classic, contemporary and cult TV series, riveting sports programs, live music, animation and documentaries in lavish packages crammed with extras. The company’s audio catalogue boasts GRAMMY®-nominated box sets, new releases from storied artists, lovingly assembled album reissues and indispensable “best of” compilations. These riches are the result of a creative acquisitions mandate that has established the company as a hotbed of cultural preservation and commercial reinvention. Shout! Factory is based in Santa Monica, California. For more on Shout! Factory, visit shoutfactory.com.