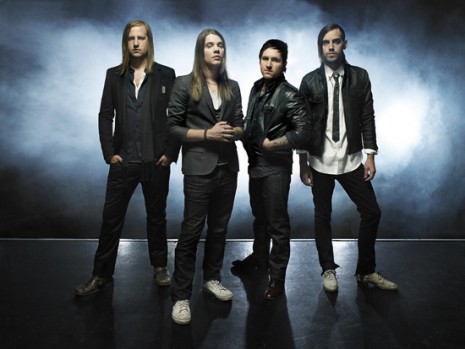 Virgin Records platinum-plus rockers THE RED JUMPSUIT APPARATUS will partner with Hot Topic’s Shockhound.com to premiere their new video for single “Pen & Paper” off their sophomore album LONELY ROAD, which debuted this year at #14 on Billboards Top 200 chart. The 48 hour exclusive premiere will begin on August 17 at Shockhound.com (http://www.shockhound.com/videos/661-the-red-jumpsuit-apparatus-pen—paper).

The video was produced and directed by former Chicago agency producers, Nathan Brown (producer) and Chris Folkens (director). RJA asked the duo to work on their new video after seeing the Telly Award-winning music video trilogy Folkens directed for Chicago-based band The Lifetime. RJA decided to shoot the video for Pen & Paper in their hometown of Middleburg, Florida at frontman, Ronnie Winter’s home this past June before hitting the road for their summer tour. Pen & Paper is about removing all the fake people from their lives. The video features RJA and their hometown friends getting rid of those individuals in a creative way while getting some aggression.

Brown and Folkens have plans to shoot RJA’s next music video in Chicago. They are also working with the band on a branded integrated experience that partners RJA with a brand name, creating an online interactive experience involving fans in a music video like never before.

RJA’s Virgin Records debut, DON’T YOU FAKE IT, debuted in August 2006 at No. 25 on the Billboard Top 200, and ended its 62-week album chart run in October 2007. The release included hit singles Face Down & Your Guardian Angel, which overwhelming demand turned into a sales phenomenon and has since added to their over 56 million plays on MySpace (Face Down over 24 million & Your Guardian Angel reaching over 26 million).