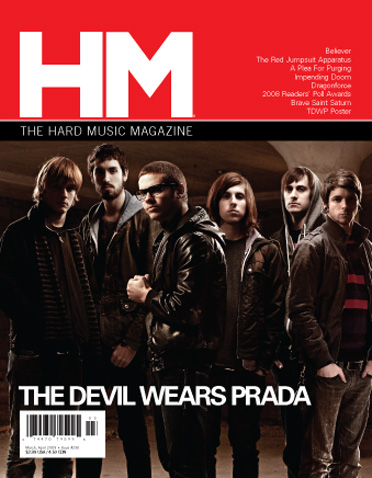 As one of the brightest, rising stars in the metalcore world, The Devil Wears Prada has been named 2009’s Band of the Year by Alternative Press.  The band will grace the cover of AltPress’ February 2010 issue, on stands January 5.  With vocalist Mike Hranica having been featured on the cover of the magazine’s Warped Tour August issue, this is the second time in less than a year that TDWP has been on the cover of AltPress.

The Alternative Press cover recognizes the breakthrough year that 2009 has been for The Devil Wears Prada – Hranica, guitarist/vocalist Jeremy DePoyster, guitarist Chris Rubey, bassist Andy Trick, keyboardist James Baney, and drummer Daniel Williams.  The band’s critically-acclaimed third album, With Roots Above and Branches Below (Ferret Records), was released in May and debuted at #11 on Billboard’s Top 200 Albums Chart, immediately following a sold-out, 43-date headline tour; the band had a Main Stage slot on the Van’s Warped Tour, co-headlined the November/December 27-date Napalm & Noise Tour with All That Remains, and found themselves on the covers of Outburn, HM, and AMP.

The Devil Wears Prada will join Killswitch Engage on their Winter U.S. tour as direct support beginning February 4, 2010.  Live, the six-piece TDWP presents a powerful intensity that many other metalcore bands never quite achieve, with savage riffs, bulldozing guitar, thunderous beats, manic synths, and an assault of abrasive vocals. On this tour, the band will perform songs from all three of their releases – 2006’s Dear Love:  A Beautiful Discord, 2007’s Plagues, and the new With Roots Above and Branches Below, including the video track, “Danger:  Wildman,” which can be viewed here <http://vids.myspace.com/index.cfm?fuseaction=vids.individual&amp;videoid=61465450> .

With additional dates just announced, the confirmed itinerary for The Devil Wears Prada, Alternative Press’ “2009 Band of the Year,” as direct support on the Killswitch Engage U.S. tour are as follows: