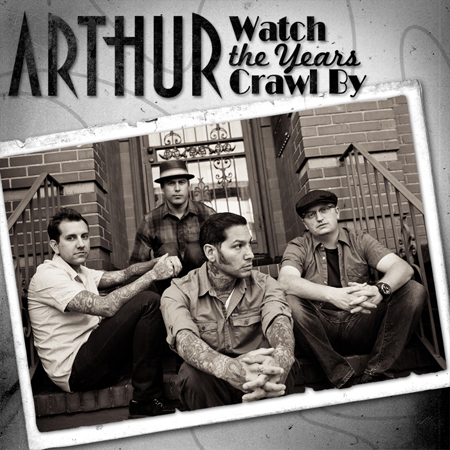 While you’re listening, read this press release and bio:

MXPX SIDE PROJECT, ARTHUR,
RETURN AFTER 8 YEARS WITH THEIR LONG AWAITED FULL-LENGTH
ALBUM, WATCH THE YEARS CRAWL BY, AVAILABLE DECEMBER 7
BAND ANNOUNCES FIRST PERFORMANCE IN OVER A DECADE

To Celebrate, Arthur Will Offer Fans Their First EP Loneliness Is Bliss Digitally, In
Addition To A Handful Of Pre-Order Specials Exclusively On www.MxPx.com

Formed as a side project by the current and past members of Bremerton, WA punk-pop band MxPx, Arthur began with the original line-up of Michael “Arthur” Herrera, Yuri “Zane” Ruley and MxPx stage tech, Neil “Alexander” Hundt in 1997. Shortly after, Tom “Edmund” Wisniewski joined, and Arthur took full form.

Using their middle names to distinguish themselves from their other project, Arthur, Alexander, Edmund, and Zane, as they like to be known, have finally finished work on the rather appropriately titled full-length album, Watch The Years Crawl By. As the band’s namesake wryly puts it, “This record was started before the industrial revolution of recording and finished in the golden age of digital recording.”

The band will release their long awaited full-length album, Watch The Years Crawl By on December 7 through their indie label, Rock City Recording Company. That same day, the band will also be offering their previously released EP, Loneliness Is Bliss digitally for the first time. Pre-sale orders and combination packages will be available starting Friday, November 26 at 12pm PST / 3pm EST on www.MxPx.com.

Five bundles will be available total, one named after each band member and one holiday bundle. The four-piece released their debut EP, Loneliness Is Bliss in 1999, the first through their newly formed independent record label, Rock City Recording Company. In support, they embarked on a two-week west coast stint, their only tour as Arthur to date. The band members were a bit apprehensive as to how their punk pop fan base would react to their 50’s doo-wop inspired tunes. The change in musical pace resonated with MxPx fans and in 2002, the quartet headed back into the studio to record their full-length but the album was postponed due to MxPx’s extensive tour schedule. Now, after many years Arthur, Alexander, Edmund, and Zane were ready to refocus their mindset and head back into the studio to finish their new release.

Don’t let Arthur’s main musical influence inspire visions of four guys on a street corner snapping their fingers and singing a cappella versions of Platters songs, though. While Arthur’s first full-length album, Watch The Years Crawl By, does boast a few songs where the influence of ‘50s/early ‘60s pop and rock & roll can be heard (“Tuck You In,” “Out of the Blue”), the songs undoubtedly diverge from the mainstream of MxPx output, there are still enough sonic reference points for fans of Arthur’s punkier alter ego. Only one track from the EP made it to the full-length, a newly re-recorded version of “Thought A Lot”. Overall, the album’s stylistic experimentation, love-centric lyric themes, and multiple melodic surprises offer something only hinted at in MxPx, a something the band hopes all music fans will enjoy.
With the long gap between records, the band collectively agrees that they “want Arthur fans to enjoy this rare moment in the band’s history. Arthur never did very much because we were busy with MxPx but what we did do was something special.”

Fans attending the band’s only performance this year, and first in over a decade will be able to see that specialness on Saturday, November 27 at Manette Saloon in Bremerton.