StompTown Revival Set to Debut In The Fall 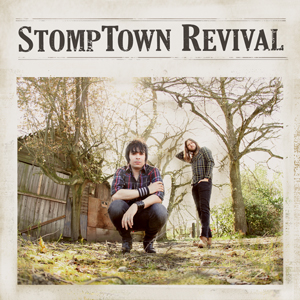 Save The City Records is happy to announce the debut project from the new duo, Stomptown Revival, which is being distributed by Sony Music.  The duo is comprised of Gabe Martinez, frontman for the critically acclaimed band Circleslide, and Brandon Bee, a solo artist/producer with over 80 production credits (Stacie Orrico, Matthew James, Amber Pacific), and together they are bringing their own indie rock and folksy blues sound to the marketplace.  Stomptown Revival’s unique rootsy sound is driven by acoustic and slide guitars, a harmonica, and a stomp box, a percussion instrument pioneered by early bluesmen.

“We wrote two songs that sounded like Americana bluesy music,” explains Bee. “We’re both managed by the same guy, and he showed up and wanted to hear the songs. I was playing a dobro; Gabe was playing harmonica and acoustic guitar. Our manager loved it and thought there was definitely something there.”

“We didn’t really intend to make a record,” Martinez adds. “We were just writing for the sheer joy of it. It was spontaneous and organic, with a sense of friendship and community, like we’re hanging around the campfire together.”

Martinez and Bee hooked up in 2004 at a music retreat in Seattle, WA, and when a Circleslide guitarist injured his hand, Bee became the substitute player.  They remained close friends who started writing songs together and then discovered their mutual interest in American Blues music.  It was at that point when StompTown Revival was born.

The new EP kicks-off with the rowdy new single, Guiding Me Home, which immediately grabs the listener and makes them hold on tight to the rockin’ new sound that is reminiscent of Mumford & Sons and Civil Wars.  Anthem Of Love was the first song written for the project and then Martinez and Bee cover the traditional and well-known hymn,Leaning On The Everlasting Arms, with a new Appalachian sound that enhanced the early southern gospel spirituals. The Sun Will Find A Wayis a modern hymn, while Waiting On The Man is a mythology for the bluesman, and Born Again centers on keeping spiritual beliefs active during our busy lives.

StompTown Revival’s website (www.stomptown.com) is also a unique experience that is fitting for this new duo, where fans can log-in for citizenship and even become Mayor!  “Our marketing strategy focused on creating a virtual town, StompTown USA, and  targets those who long for real, authentic organic music, “ says Keith Stancil, President, Artist Garden Entertainment and Vice President, Marketing, Save The City Records. “We implemented an internet campaign soliciting citizenship in order to build a fanbase before anyone had heard the music.  Citizens can earn points which give them access to special goodies and the person with the most points becomes Mayor.  The response has been incredible!”

To check out the latest updates on StompTown Revival please visit them online at www.stomptownrevival.com,www.facebook.com/StompTownRevival and on Twitter @strevival.