Skillet debuts at #2 on Billboard 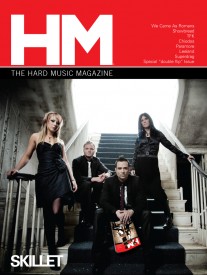 “AWAKE,” the acclaimed new album from Atlantic recording group Skillet, has made a blockbuster chart debut, entering the SoundScan/Billboard 200 at #2, with sales in excess of 67,000.

Produced by Howard Benson (Daughtry, Flyleaf), “AWAKE” is highlighted by the electrifying new single, “Monster.”  The track is currently approaching the top 20 at Active Rock outlets nationwide, while a companion video will premiere today on AOL’s Noise Creep.  Album listening parties are also currently featured on AOL and MSN.

In addition, “Monster” will be heard as the official theme song each week during the upcoming ACC College Football season, as well as on the soundtrack to MTV’s new hit series, Bully Beatdown. NBC recently aired the song during The 25th Anniversary of WrestleMania special, and along with “Hero,” will be a part of the video game, WWE® SmackDown® vs. Raw® 2010.

What’s more, “Hero” is featured in the promotional campaign heralding the new season of NBC Sunday Night Football.  A companion video for “Hero” is also in production, with a premiere date to be announced soon.

One of America’s hardest working live acts, Skillet will celebrate the breakthrough success of “AWAKE” with the 50-city “Awake & Alive Tour,” set to launch on September 24th at Fort Wayne, Indiana’s Embassy Theater (see attached itinerary).  The headline tour will then travel the country through early December.  Skillet’s special guests on the “Awake & Alive” tour will be Hawk Nelson, Decyfer Down, and The Letter Black.

Check out a video and a nice article on Skillet from our friends at noisecreep: http://www.noisecreep.com/2009/09/02/skillet-monster-video-premiere/

Decyfer Down, and The Letter Black