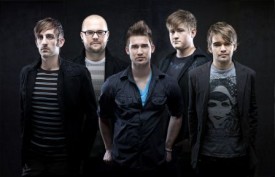 “At Centricity we not only try to honor the artists’ talent but more importantly we embrace their ministry,” says Chris Hamilton, Manager A&R, Centricity Music.  “Sixteen Cities is such a talented group of artists that have been compared to The Fray, Jars Of Clay and The Afters.  But what really impacted us at the label, was their ministry with the unchurched in public high schools around the country. It has become a very powerful and effective calling that also translates well with the more traditional music venues.”

“In high school, we started out by leading our peers in worship on Wednesday mornings and we fell in love with it,” recalls the band’s lead vocalist and keyboardist, Josiah Warneking.  “As soon as we graduated, we all prayed and sought God’s true heart and will. We felt called to full-time music ministry, but knew nothing about the music industry.  A week or two later we got a phone call from a guy with a ministry called Common Ground, which is basically a huge production with concerts, games and a Gospel presentation in a public school. So here we were thinking we’d have no chance to continue singing to students after having just graduated, and we wound up in front of hundreds and sometimes thousands of teenagers in gymnasiums singing about Jesus.”

Sixteen Cities hails from Portland, Oregon and the group started performing as a band in their early years of high school.  The group’s moniker was inspired by the tribe of Issachâr in Joshua 19, which also understood the current needs of its generation.  The band’s modern rock sound and heartfelt messages began connecting with fans within the indie Northwest music scene.  Sixteen Cities began garnering national recognition when a friend at a Christian bookstore started passing their CD around the industry and Centricity Music invited them to their indie artist retreat, which led to their label deal in 2008.  Sixteen Cities remains an active touring band and has toured with such other acts as Kutless, Building 429, Fireflight and Sanctus Real.

For more information on Sixteen Cities please visit online at www.sixteencities.com and www.myspace.com/sixteencities.