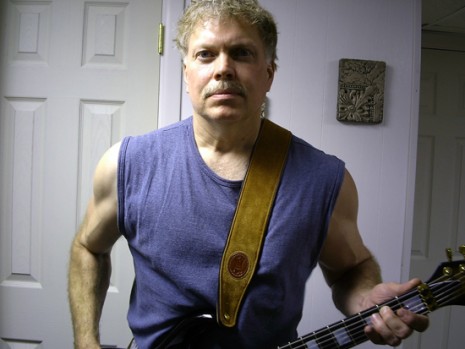 1. Name 3 bands that, had they not released a certain album at a certain time … and you would not exist as a band.
Bride, Stryper, and Saint all released stuff in the 80s that really motivated me to want to start creating original music.

2. If there wasn’t music, what skills would your members use and what would they do?
I would probably do woodworking if I didn’t have music as a creative outlet.

3. When asked to describe your band by comparing yourself to others (the dreaded “Recommended if you like” question), who would you list?
It would probably have to be Megadeth.  I’ve had a lot of people compare my music to Megadeth over the past few years.

4. What’s a secret or little-known fact about your band (or one of your band members) that would make you the darlings of the music world if we all knew it?
I didn’t start to learn to play an instrument (bass at first) until I was 25.

5. If there was another band and another album that you could give everyone as a present for Christmas, what album would that be? Why?
I would have to say the album Disciple “By God”, because it has such cool and diverse music (and some great lyrics) on it, and it is really well played.

6. What is one belief, conviction, idea, or passion that you honestly think might’ve been deposited inside you or given to you by God?
I think that it is the belief that no matter what life throws at you, if you turn to God and always trust him first things will work out eventually.  They may not always turn out they way you planned or expected, but they do turn out the way they are supposed to, usually giving you an opportunity to grow.

7. What’s one of the most memorable things (either good, bad, or funny) that’s happened at one of your shows?
A few years ago I had just started playing in a hard rock worship band at the church I attended at the time.  I had only been to one practice and really didn’t have all of the material mastered as well as I would have liked.  A local news crew showed up that first Sunday I was playing to do a piece about the unconventionally loud and heavy rock music service.  It worked out fine, but I’m not sure I’ve ever been so nervous about playing anywhere!

8. If you had a chance to perform for most of the televised world and play just one song, which song would you play … and why?
It would have to be “Above” since it is the title song to my newest release and it’s pretty heavy and fun to play.

9. If a super surgeon removed all of your emotions and the ability to feel any emotion for the rest of your life, which one or ones would you most want to have back? Why?
Love, because without that you don’t really have anything worth while.

10. If you could ask God one question, what would you ask Him?
What can I do to have the most positive influence on those around me?

11. What’s the best video on youtube (like, if our readers had to type in a word or a few to search it, what would the keywords be?)??
That’s a tough one.  I make a lot of music videos for my YouTube channel so I’m on there quite a bit.  There’s a channel called PDXguitarfreak where a guitarist does some really entertaining stuff.

12. If someone came to you and said, “Hey! I need to make some changes in my life…Help me out! I’m going to take one piece of advice from you and apply it to my life and/or make it a habit for 30 days.
What would that piece of advice be?”
Spend some time in God’s word and in prayer every day.  That’s when things really change.

13. In 4 sentences or less, explain how your band came to exist. (and give us a date)
Right now I am the band.  My wife writes some of my lyrics so things really came into existance as they are now when we were married on July 4, 2006.

14. What are your names, instruments, album titles (or song titles if no albumsLitt recorded), and location/hometown.
Tracy Towns, guitar, bass, vocals,lyrics. Rita Towns lyrics.  My latest album is “Above”.  My other 3 albums I’ve done since my wife and I started writing together are “Devastation”,  “Townstra” and “Tracita Towne”.  I live in Peoria, IL.

15. What is the release date of your next (or latest) album? Or what is the next big date on your band’s calendar?
“Above” was released mid September 2009.

16. What’s one question you’d always wanted to be asked in an interview? (and please provide your answer)
Why don’t you use a pick when you play guitar?
Because I started out as a bass player and I’ve always liked to feel the strings.  A pick just feels like it slows me down.