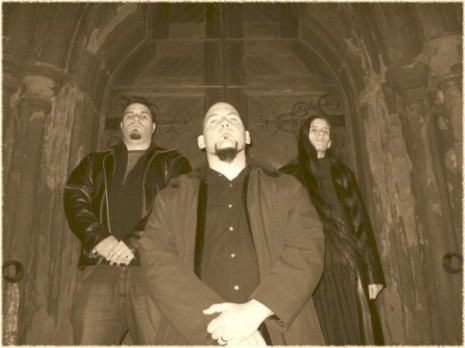 Name 3 bands that, had they not released a certain album at a certain time … and you would not exist as a band.
Saviour Machinev(Legend Series),Virgin black (Sombre Romantic), Antestor(Return of the Black Death).

If there wasn’t music, what skills would your members use and what would they do?
Roy(lead vox/drums) and Meg(keys/clean vox) would both probably be teaching Martial Arts.

When asked to describe your band by comparing yourself to others (the dreaded “Recommended if you like” question), who would you list?
Amorphis,Dark Tranquility, HIM.

What’s a secret or little-known fact about your band (or one of your band members) that would make you the darlings of the music world if we all knew it?
Both of the permanent members are married to each other and have 3 beautiful children:)

If there was another band and another album that you could give everyone as a present for Christmas, what album would that be? Why?
Amorphis’s ‘Eclipse’ for it’s incredible dynamics and subtle progressiveness that doesn’t sound the least bit contrived.

What is one belief, conviction, idea, or passion that you honestly think might’ve been deposited inside you or given to you by God?
To maintain sound doctrine and Holy living,experiencing Jesus in a personal relationship full of joy and in compliance with The “Apostles doctrine.”

What’s one of the most memorable things (either good, bad, or funny) that’s happened at one of your shows?
Well,we’re a studio band at this point it would have to be when great musicians whose work we admired complemented us on our music.

If you had a chance to perform for most of the televised world and play just one song, which song would you play … and why?
“An Omen in the Dark” because we feel it best represents the many different componenets that make up our sound.

If a super surgeon removed all of your emotions and the ability to feel any emotion for the rest of your life, which one or ones would you most want to have back? Why?
Both sorrow and joy. Both of these are neccessary for christian maturity and they also are great inspiration for songwriting:)

If you could ask God one question, what would you ask Him?
We ask him lots ,we think we all need to listen more:)

What’s the best video on youtube (like, if our readers had to type in a word or a few to search it, what would the keywords be?)??
Shai linne preaching the Gospel,Paul Washer isn’t it enough.

If someone came to you and said, “Hey! I need to make some changes in my life…Help me out! I’m going to take one piece of advice from you and apply it to my life and/or make it a habit for 30 days. What would that piece of advice be?
Pull the plug on the rest of the world for now,put yourself somewhere quiet with a Bible and start talking to God.

In 4 sentences or less, explain how your band came to exist. (and give us a date)
Meg and Roy both come from very different musical backgrounds,Meg has sung her whole life but got into playing keyboards after hearing Virgin Black’s “Sombre Romantic’ album.Roy comes from a Metal and Hardcore background but Antestor’s “Return of the black Death” album completely turned me around musically and after that all I wanted to hear and play was symphonic metal,so being married,it was a natural progression for us to do this kind of music together.