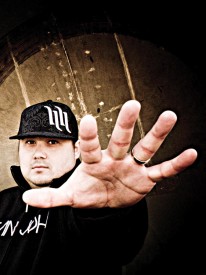 Name 3 bands that, had they not released a certain album at a certain time … and you would not exist as a band.
Well first off, I decided I wanted to be a musician when I saw Petra’s “on fire tour” in 1989 (shoot I’m dating myself) then solidified my decision after listening to DC Talk and S.F.C. so I would say my 3 would be:
1. Petra, on fire
2. S.F.C., listen up
3. D.C. Talk, Free at last

If there wasn’t music, what skills would your members use and what would they do?
I think I would be involved in one of two things…either Custom cars/motorcycles or the bicycle industry, I love both! I enjoy welding and modifying stuff, using my creativity to make ideas in my head reality.

When asked to describe your band by comparing yourself to others (the dreaded “Recommended if you like” question), who would you list?
I will never be able to beat the “you sound like Toby Mac” comments from music fans, and honestly I love Toby so that’s cool. But I personally think my music is more like Gym Class Heroes or even group one crew.

What’s a secret or little-known fact about your band (or one of your band members) that would make you the darlings of the music world if we all knew it?
I think People would enjoy the fact that we are brutally honest in music and in life. When we perform a show nothing is hidden and nothing is taken away. You will hear about our struggle and our triumphs, and our experiences from day to day. We present the Gospel in a way we would like to hear it and a way I believe connects to the listener on a personal level.

If there was another band and another album that you could give everyone as a present for Christmas, what album would that be? Why?
anything from Matisyahu, I say that because the man sings and writes with such passion it is moving…

What is one belief, conviction, idea, or passion that you honestly think might’ve been deposited inside you or given to you by God?
from the very beginning the fact that I am doing this has been somewhat of an anomaly. I am a white boy from Lacomb oregon (google earth it…) that decided to do rap. God placed in a me a vision from an early age (13 years old) and all anybody ever told me was that someone like me could never do something like this. However God had other plans and all I had to do was move on it and trust I was operating within his will. As things continued to line up and I proceeded to start my ministry it was obvious God was in it. I always say in my concerts “If God can use a thick white boy from Lacomb Oregon for rap, he can use anyone for anything”. I like to look at the disciples. Jesus chose the preverbal “low life’s” to walk with him because he knew they simply follow his will. I desperately want to tell people God loves them, and he wants to use their talents and gifts.

What’s one of the most memorable things (either good, bad, or funny) that’s happened at one of your shows?
For the first two or three years of my ministry Satanic cults kept showing up at my Concerts! It got so bad that I started knowing their names and faces. Another example would be John Karaker who plays bass for me was rocking out one night and none of use could figure out why he had a whole bunch of dirt around where he was standing on stage…turns out is was not dirt but instead he had obliterated the dress shoes he was wearing! He shredded the soles right off them!! this is the same guy that broke his bass in HALF a few weeks earlier in Sacramento..the musicians friend guys looked at us like we were idiots..

If you had a chance to perform for most of the televised world and play just one song, which song would you play … and why?
I would play my song “back home”. The reason why is I want to speak  the love and sacrifice Jesus made on our behalf in a real, and relatable way. I believe that song does it. listen for yourself and I hope you agree.

If a super surgeon removed all of your emotions and the ability to feel any emotion for the rest of your life, which one or ones would you most want to have back? Why?
first off I would kick that surgeon in the shins and ask WWWHHHHHYYYYYYY? Secondly I would ask to keep Love, because all things operate in Love!

If you could ask God one question, what would you ask Him?
I ask God questions all the time…Recently I have been wondering about direction. I think we all as Humans wonder where we are heading and the pathway that takes us there. my song “stones” deals with that aspect personally, and features another guy that has had a interesting trip, Shawn Mcdonald.

What’s the best video on youtube (like, if our readers had to type in a word or a few to search it, what would the keywords be?)??
“Grandma and Grandpa  Ghost ride the whip” second place would be “drama chipmunk”

If someone came to you and said, “Hey! I need to make some changes in my life…Help me out! I’m going to take one piece of advice from you and apply it to my life and/or make it a habit for 30 days. What would that piece of advice be?
WOW…so many thoughts jump in my head. If I were to tell someone to create a habit it would be this. Every morning when you wake up look yourself in the mirror and make these words cross your lips: “God is real and he loves me” the reason I say this is because when the creator of the universe loves YOU he walks beside you, he prepares the way. I think sometimes faith and God are cluttered by our human nature and we tend to forget God is our Father who only wants the best for us. My biggest enemy is me when I try to read between the lines and not let his will be his will.

In 4 sentences or less, explain how your band came to exist. (and give us a date)
December 12th 1993 I decided to start performing. In 2005 I released my first record on BEC Recordings and brought on a back up band

What are your names, instruments, album titles (or song titles if no albumsLitt recorded), and location/hometown.
Benjiman J Hulburt  Lacomb, Oregon, “Activate” 2005 BEC Recordings, “S.K.R.I.P.T.” 2009 Save the City Records

What is the release date of your next (or latest) album? Or what is the next big date on your band’s calendar?
we are releasing my new record “S.K.R.I.P.T.” (spreading kingdom realities in perilous times) in stores October 6th. it is available on itunes and www.savethecityrecords.com right now! catch us on the mainstage 7 p.m. friday night at Joshuafest or out on the road during the “american hope” tour in late october/ early november.

What’s one question you’d always wanted to be asked in an interview? (and please provide your answer)
” hey Benjiman, what is the name of your tour van?”