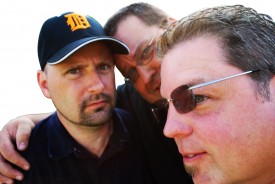 Name 3 bands that, had they not released a certain album at a certain time … and you would not exist as a band.
Donnie: ZZ Top Eliminator; Soulscholar literally would not exist without this album. It was released in 83 but in the early months of 84 I found myself involuntarily air drumming to the intro of, “Gimme All Your Lovin’ “. Up until then, I never had an interest in playing the drums. I always wanted to be a guitar player. My sister saw me air drumming and noticed that I was, well, doing it right. Then she said, “You outta take drum lessons, Donnie.” The rest as they say is history.

Mark: Led Zeppelin, Van Halen, and Journey. Van Halen’s first album blew me away when it came out and I heard DLR’s barking mad vocals and EVH’s otherworldly guitars (am I dating myself?). That music just hooked me. Then I heard the Neal Schon/Steve Perry combo when Journey’s Infinity album came out; their soaring music and lyrics still resonate to this day and their new music proves it. And Zeppelin? All their albums–all about the rhythm. The Talented Mr. Jones brought it all home.

Egon: The one album that I can specifically point to for me is Van Halen’s “1984”. That was when Eddie’s guitar playing really set a fire in my heart to pick up a guitar and learn how to play. Next would be Led Zeppelin IV and ZZ Top’s song “la Grange” off of Tres Hombres.

If there wasn’t music, what skills would your members use and what would they do?
Donnie: I might be a teacher or a truck driver which is what I was anyway. Egon, would probably be a child psychologist.  Whitbeck puts his skills to use.

Mark: I would be an filmmaker, electrician, robot programmer, or a web developer probably. Or maybe I would work with acrylic paints or photography or something.

Egon: Yeah, I would probably be a counselor or a photographer.

When asked to describe your band by comparing yourself to others (the dreaded “Recommended if you like” question), who would you list?
1) Old Black Sabbath.
2) Mountain
3) Led Zeppelin
4) The Kinks
5) King’s X
6) Hendrix

What’s a secret or little-known fact about your band (or one of your band members) that would make you the darlings of the music world if we all knew it?
Donnie: ?

Mark: Egon’s real name is “Drabbuh Kram.” If that wouldn’t make us darlings of the music world, I don’t know what would.

If there was another band and another album that you could give everyone as a present for Christmas, what album would that be? Why?
Donnie: Chick Chorea, “Light Years”. It’s music that anyone can enjoy. You buy that CD and you just bought yourself fond memories and good times.

Mark: Journey, “Revelations” — they have a new young singer that can take you back to the past and still have enough energy to carry you into the future. A band that transcends time, for sure.

Egon: Yes, “90125”. That’s the album I listened to more than anything and I think everyone can come away with something from it.

What is one belief, conviction, idea, or passion that you honestly think might’ve been deposited inside you or given to you by God?
Donnie: We are all equal, no one on the planet is better or more valuable than me, nor I more valuable or better than anyone else.

Mark: Donnie pretty much sums it up.

Egon: Uh, yeah, ditto. How do you improve on that?

What’s one of the most memorable things (either good, bad, or funny) that’s happened at one of your shows?
Donnie: Got a last minute call to open up for a little known band. We arrived at the gig only to be stopped by the other band who asked us, “Who do you sound like?” I answered, “Who do you sound like?” The smell of haughtiness was thick in the air from these misguided fellows. Proceeded to BLOW THEM OFF THE STAGE!

Mark: We played one venue where Egon built the stage himself. During the show he decided to jump off a higher tier and down beside me. Egon went crashing through the stage floor and was locked into position at the knees and never missed a beat! He hasn’t been allowed to play with power tools since.

Egon: Yeah, you had to bring that up, didn’t you? I have to agree. It was pretty funny. Not quite THAT bad, though.

Mark: Yes it was.

If you had a chance to perform for most of the televised world and play just one song, which song would you play … and why?
Donnie: Seasons. Might sound arrogant to have a whole world of songs to play and still choose our own but it’s after all our own creation and it has a wonderful message.

Mark: Of course it has to be one of our own. “Bronze Serpent” reminds me of good times and great music.

Egon: “I Believe It” from our album “Power to the People” because it’s just so much danged fun to play!

If a super surgeon removed all of your emotions and the ability to feel any emotion for the rest of your life, which one or ones would you most want to have back?
Donnie: Happiness.

Mark: Is hunger an emotion? No? Well, I wouldn’t want it anyhow. That would be bad. Um, how about optimism? I’ll take optimism for $1,000 Alex, I mean, Doug.

If you could ask God one question, what would you ask Him?
Donnie: Where on your green earth is the remote for the downstairs TV?

Egon: That’s two questions, Mark. Mine would be, why mosquitos?

What’s the best video on YouTube (like, if our readers had to type in a word or a few to search it, what would the keywords be?
Donnie: Declaration of Dependence <http://www.youtube.com/watch?v=pNxG0Eo3QtY>

If someone came to you and said, “Hey! I need to make some changes in my life…Help me out! I’m going to take one piece of advice from you and apply it to my life and/or make it a habit for 30 days. What would that piece of advice be?
Donnie: The golden rule.

Mark: Don’t fart in public. Very bad idea. Even worse: farting in enclosed spaces like elevators. Everyone knows who did it, even if you think they don’t. Farting just plain stinks.

In 4 sentences or less, explain how your band came to exist. (and give us a date)
Donnie: Soulscholar consists of three friends who have been playing music together off and on for about eighteen years. Although I’ve always played the drums, in March 2004 after being fired from one of the worst jobs I’ve ever had, my wife told me about a guitar and amp that was for sale at a garage sale. I bought them and soon started writing and recording new songs. Egon and Mark heard them and thought they were pretty good so we started this new band.

“Power To The People” is the debut album from Soulscholar

Our hometown is Detroit, MI.

What is the release date of your next (or latest) album? Or what is the next big date on your band’s calendar?
“Power To The People” was released 6/1/2009

What’s one question you’d always wanted to be asked in an interview? (and please provide your answer)
If you had your life to live all over again, would you change anything?
As long as I had this life, the same family and childhood. The same wife and kids, and the same friends and band mates. The only thing I’d change would be a winning lottery ticket in the mix somewhere. 😉