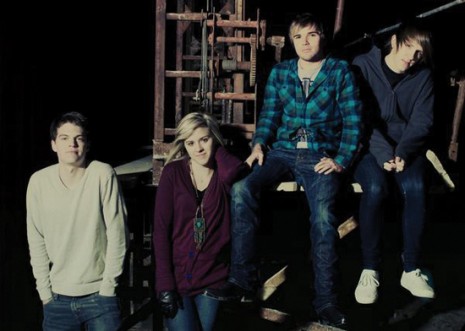 Name 3 bands that, had they not released a certain album at a certain time … and you would not exist as a band.
Jake: bands don’t make us we make us. However some of our heavy influencers are the jonas brothers, Paramore, Conditions.

If there wasn’t music, what skills would your members use and what would they do?

If we weren’t involved in music Aaron would probably own the world as he is very active in the business world, stock market, and real estate. Justin would be a professional Disney star. Jake would be a stunt man. Christian would still be in HS and Lindsay would be the next project runway modal or a teacher as she is very involved in fashion and loves kids.

When asked to describe your band by comparing yourself to others (the dreaded “Recommended if you like” question), who would you list?
Paramore we have a chick singer so you kida have to do that, Anberlin, and Circa Survive is what weve been told a lot.

What’s a secret or little-known fact about your band (or one of your band members) that would make you the darlings of the music world if we all knew it?
When we go on tour Justin and Jake bring a ton of avocados and we jam to the jonas brothers in the 3d concert. I know lame right but were just kids having fun.

If there was another band and another album that you could give everyone as a present for Christmas, what album would that be? Why?
Well for me right now I would have to Anberlin Cities it’s a great Album and has helped m through a lot of stuff currently in my life.-Aaron

What is one belief, conviction, idea, or passion that you honestly think might’ve been deposited inside you or given to you by God?
We’re here not only to play music but to be able to spread Gods grace and glory to every one we come into contact with. We typical give a small talk about it on stage and ask any one that wants to talk to come get with us. Where here by the grace of God.

If you had a chance to perform for most of the televised world and play just one song, which song would you play … and why?
Probably the Letdown or Blackout. They are both really great high energy songs that have a great positive and encouraging message. That you can be your self and have fun and you don’t have to conform to the world to be accepted. Black out is just about searching for your self and determining where you stand on certain issues.

If a super surgeon removed all of your emotions and the ability to feel any emotion for the rest of your life, which one or ones would you most want to have back? Why?
Love, because with out Love we are nothing.

If you could ask God one question, what would you ask Him?
Would you like to go grab some coffee?

What’s the best video on youtube (like, if our readers had to type in a word or a few to search it, what would the keywords be?)??
DUH City Light Dreams Cornerstone Encore stage.

If someone came to you and said, “Hey! I need to make some changes in my life…Help me out! I’m going to take one piece of advice from you and apply it to my life and/or make it a habit for 30 days. What would that piece of advice be?”
Never loose sight of the bigger picture and remember faith hope and love those are the most important things in life. That’s kinda 2 but its okay.

In 4 sentences or less, explain how your band came to exist. (and give us a date)
We formed in October 2008. Justin and Christian had been jamming invited me(aaron) to join. I invited Lindsay than jake.. We started wrighting and then took it from there.

What are your names, instruments, album titles (or song titles if no albumsLitt recorded), and location/hometown.

What is the release date of your next (or latest) album? Or what is the next big date on your band’s calendar?
November 3rd We have a half page article about us coming out in AP Magazine and we are releasing our Music video in November.

What’s one question you’d always wanted to be asked in an interview? (and please provide your answer)
Why does every one in your band call every member jake?