RETROACTIVE RECORDS plans for a new Deliverance release in 2010 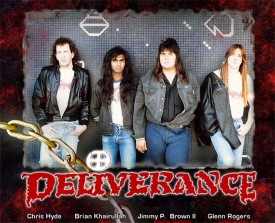 Deliverance will be playing live in Cleveland OH at Peabody’s Downunder on November 21st, 2009…

The original members of Jimmy P. Brown II, Brian Khairullah and Glenn E. Rodgers will be together on stage for the first time since 1989… They will be joined by Mike Reed on drums who played on the Retroactive Release “As Above-So Below” as well as being Brown’s drummer for his Jupiter VI project along with Brian Khairullah on guitar. Glenn Rodgers is currently playing lead guitar for the classic metal band “Hirax”.

The 4 members are currently working on the next “D” release entitled The Annals of Subterfuge to be released 2010 on Retroactive Records. The band hopes to play numerous shows in support of this record and expect to be a part of the years Festival Appearances.