Q&A with Hunter Harrison, Creator of the Mend Mark 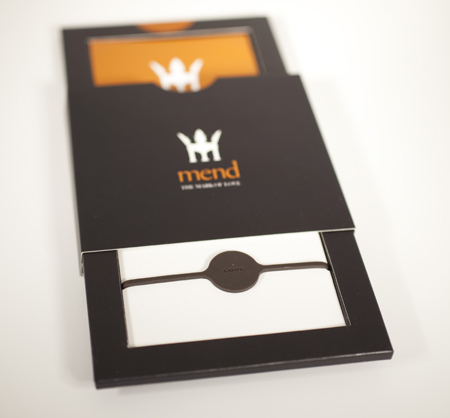 Q: How did you arrive at the idea for the Mend Mark? Why a bracelet?

A: I always thought about getting a tattoo. I still haven’t, but tattoo designs frequently cross my mind, and if I ever got one I would want it to be meaningful. On one particular day, I had the idea of getting two circles tattooed on my wrist to resemble a hole. But not just any hole—the hole that killed a king. The more and more I thought about it, the more I came to realize that nowadays EVERYONE has a tattoo and it would almost be rebellious NOT to get one. (I guess you could consider me a reverse rebel.) So I decided to do something a little different, something that would reach many more people than just some ink on my wrist. I took the idea and designed a bracelet instead, and consequently, the Mend Mark idea was born.

Q: At first glance Mend Mark seems like a nebulous name. What does it mean?

A: I’ve always liked the word “mend” and I feel like it’s underused. So it was an easy decision to incorporate that into the name. It fit the product purpose, and since it was representing one of the marks of Jesus, Mend Mark was an obvious choice. Plus it had a nice ring to it and with tattoo roots it seemed natural to call it that. I wanted it to be more than just another bracelet or wristband. I wanted it to represent a movement. So the “Mend Mark” it became.

A: There are three main things I want to be accomplished. First is that I wanted people to remember the sacrifice. I wanted to unite people—Christians (no matter the denomination) and even people of other worldviews—on one common message: LOVE. The love that Christ preached in particular. With so many books out there and theological debates on who’s right and who’s wrong, sometimes we forget the simplicity of Christ’s main message: LOVE. I figured that no matter what one believes, they can’t deny that selfless love can change the world… and sometimes we need a reminder of that. So I coined the phrase “Remember Love” to be printed on the bracelet. The second thing is that I wanted people to emulate the emotion. I wanted it to require the wearer of the product to engage in conversation about the love of Christ (and hopefully show that love to others) instead of just letting the product talk for them. I felt that if this was done properly it could force people into intentional situations where they were able to demonstrate their faith. If I was a non-believer and I saw someone wearing an obvious Christian product, I doubt I would ask that person about it because I would already know what they were going to say. But, if I saw this, I would want to know what it was. It sparks curiosity… and in turn that curiosity may open some doors for people to share the love of Christ with others. Finally, I wanted it to inspire people to change the world around them. I decided to find a cause to support through the sales of the bracelet. There was no reason for me to keep all the profits for myself. I wanted to be able to give back and share the proceeds somehow. I researched and prayed and petitioned God on what ministry to support and God led me to Living Water International. I knew I wanted to help fight malnourishment in one way or another and providing “Living Water” seemed to fit the purpose of the product—using “love” to mend. That’s what it’s all about and this product allows that to happen on a global scale.

Q: Where did the inspiration to create the Mend Mark come from?

A: My mother was the most influential person in my life. She raised me on her own, even homeschooled me in high school, and I think that extra time with her really impacted me. She passed away from cancer in 2007, but she always told me I would do great things. My wife, Morgan, has been extremely instrumental in encouraging me to take those words from my mom to heart and make them a reality. Morgan motivates me like no one else can and has been a tremendous source of love and support throughout the entire process.

Then my work in banking inspired me. All day long I am helping people achieve their dreams getting businesses and ideas started. I wanted to get out there and start doing something myself. But I wanted it to be meaningful. Since my son was born two years ago, he’s given me an added motivation to do something bigger than myself, something that will somehow leave a legacy behind.

Q: The Mend Mark is certainly growing as a movement. It’s even been worn by celebrities. What’s next for the Mend Mark?

A: The Mend Mark isn’t the first idea I’ve tried to get off the ground. It definitely won’t be the last either. By far, it’s been the most fun and the most successful, and the one I’ve been most passionate about. I’m currently working on additional product designs as well as T-shirts that will go along with the original Mend Mark purpose. The future is bright and I can’t wait to see where God takes it.