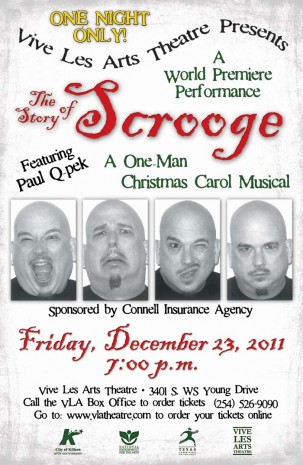 Paul Q-pek Performs in One-Man Musical
Multi-talented performer Paul Q-pek is presenting THE STORY OF SCROOGE. A one-man Christmas Carol musical at VLA Theatre in Killeen TX.
Paul has been working on adapting the classic by Charles Dickens and has written several original songs for the production.
When asked to describe the show, Q-pek says “It’s like watching someone have a psychotic episode! I am playing about 30 characters soI will be arguing with myself, laughing, crying, dancing, singing and doing it all without a net! The cast consists of me and a sole piano player. It’s a very sparse, stark presentation. No sets, no props, no costume changes. It’s kind of like theater of the mind.”
When asked why he would attempt such an undertaking, he answered “I wanted to challenge myself, and I’ve always wanted to do a versionof A Christmas Carol. The story is so impactful and it gets me everytime. I truly believe that there is a place in every human soul, that can only be touched by a story of redemption.”
THE STORY OF SCROOGE will be presented for one night only Friday, December 23 2001 at 7p.m.
Go to www.vlatheatre.com for tickets. Or call the box office at (254) 526-9090.