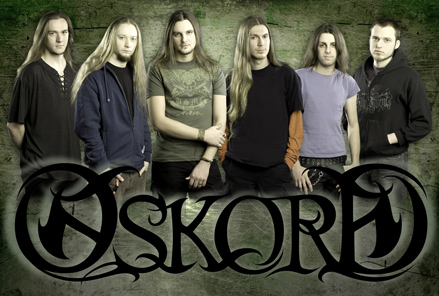 Soundmass is pleased to announce the signing of folk metal band OSKORD for the release of their album “Weapon of Hope”.

The history of Oskord begins in the ruins of successful Ukrainian band Holy Blood. As part of Holy Blood, the members of Oskord worked together for 5 years, during which they recorded 4 albums and performed around Europe. After all the members of Holy Blood except frontman Fedor left the band in 2008, guitarist Sergey Nagorny, bassist Alex Andrushchenko and drummer Dmitry Titorenko, full of energy and creativity and not wanting to give up music, decided to continue working together. They immediately recruited Andrey Yakovenko who had begun playing flute and bouzouki at the last few Holy Blood concerts.

Gathering together for their first rehearsal on August 11, 2008, Oskord was born. By spring 2009 they had begun recording their debut album, recruiting vocalist Grigory Nazarov, familiar for his work in Coram Deo, in September 2009. In October 2010 they completed work on their debut album “Weapon of Hope”.

“Weapon of Hope” is a combination of modern metal and folk that incorporates ethnic instruments like the flute, tin and low whistles and bouzouki. Their sound will appeal to fans of Eluveitie and Holy Blood, but for a better idea of what to expect head over to the Oskord website or MySpace to hear the song “Salvation Ark” and watch the recording studio video for “Serpent of Brass”: www.oskord.com & www.myspace.com/oskord

If you like what you hear, we have made Oskord “Weapon Of Hope” available for pre-order at http://downloads.soundmass.com and www.soundmass.com. As a bonus, everybody who pre-orders a physical CD of “Weapon Of Hope” from http://downloads.soundmass.com will immediately receive a free instant download of the album to listen to until they receive their copy in the mail in a couple of months time. Included with the Oskord download is the full artwork (including lyrics) in PDF format.