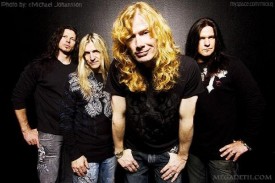 Megadeth are proud to announce that they will be embarking on a headline tour, their first in support of their latest album, ENDGAME. The ENDGAME tour will feature Machine Head, Suicide Silence and Arcanium in support slots from November 14 through December 3. Warbringer will replace Machine Head on the bill, beginning on December 5.

Megadeth’s twelfth studio release, ENDGAME, will be released on September 15, to much fanfare, with early praise for the record flooding in, including a nod from the prestigious New York Magazine, which dubbed the record a “Want to Hear” pick, while the band had chats with RollingStone.com, Decibel, Revolver,Guitar World, AOL Noisecreep, Thrasher, among a host of others.

Fans and critics alike are deeming this Megadeth’s best, most visceral record of the decade. Known for their ferocious, unforgettable and brain-scarring live shows, the band will co-headline another throng of dates with fellow metal icons Slayer in Canada, beginning on November 8 and running through November 13, and will subsequently lay waste to venues in the States.

The band will also cap off their incredibly anticipated release week with a live performance on “Late Night with Jimmy Fallon” on September 17.

Dates for the ENDGAME tour are as follows:

Pre-sales begin September 15 at 10 AM, while regular onsales to the general public start the same time on September 18. For further information about the tour, additional dates and ticketing, check www.megadeth.com regularly.