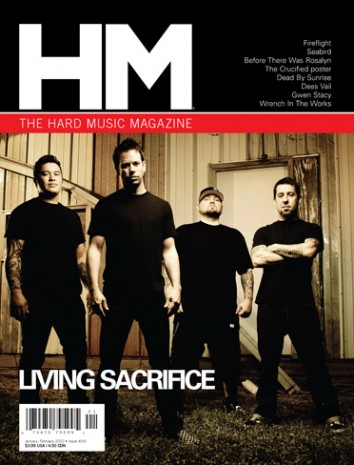 Metal legends LIVING SACRIFICE are debuting the video for the track “Rules of Engagement” today on AOL Noisecreep. The video is the first from the band’s anticipated new album, The Infinite Order, which drops January 26, 2010 on SolidState Records.

“This song has to do with the impossible situation that some of our military are put into these days. They are fighting an enemy that looks like the civilians they are also trying to protect,” explains guitarist/vocalist Bruce Fitzhugh of the video’s imagery of a soldier dealing with Post-Traumatic Stress Disorder.

The video can be seen here:
http://www.noisecreep.com/2009/12/22/living-sacrifice-rules-of-engagement-video-premiere/

“Rules of Engagement just came out as a really strong song musically,” says Fitzhugh, who, with the rest of LIVING SACRIFICE, is celebrating 20 years of genre-defining metal. “It was one of the last songs that we wrote for the record and it came together really well. It was one that we wrote in pre-production. We all agreed that it would be the song that we wanted for the video.”

The Infinite Order– LIVING SACRIFICE’s seventh full-length overall, and first since 2002’s acclaimed Conceived In Fire – is shaping up to be one of 2010’s most hotly anticipated metal releases, and “Rules of Engagement” should prove to remind fans waiting for the album just why it is that so many of today’s heavy music leaders hold LIVING SACRIFICE and their legacy in such high esteem.

“You can hear LIVING SACRIFICE’s legacy in the entire generation of bands who’ve come after them… And those bands still haven’t caught up,” says Tim Lambesis of AS I LAY DYING. ”

There aren’t too many metal lifers out there who AREN’T named SLAYER or METALLICA that are still making ferociously relevant music 20 years into their career. LIVING SACRIFICE are among the few and the proud, and despite the fact that they have inspired a huge portion of today’s young metal bands, they’re still playing like they’ve got something to prove.