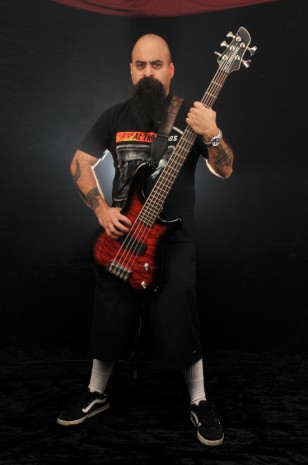 The new signature model, thanks for rigorous research and development, i.e. me bashing it for a year out on tour, has some new improved features. It has a new lavaburst finish, EMG-HZ pickups, Volume – Blend – Tone controls, Gotoh tuners, and the Asesino “Maldito X” logo in the 12th fret.

*What’s your current live rig, aside from the Tremor basses?

My live rig varies, depending on the situation. My touring rig consists of an ElectroVoice RE-V wireless going to a Line 6 Bass Pod xt Pro through 2 SWR Amplite power amps, each running an SWR Goliath Sr. 6X10 cabinet. I’ll put a Dunlop Bass Wah in the effects loop. For local shows, I’ll run either a Line 6 LowDown 750 head through an SWR 6X10 or, if there’s a house rig or if I’m doing a fly away show, I’ll just take an SWR Headlite and a Tech 21 VT Bass Deluxe pedal.

*You’ve been a Fernandes user for quite some time, what makes the Tremor your weapon of choice?

I’ve been using the Tremor for about 10 years. It’s a solid bass, I can beat the snot out of it, it always sounds and plays great, and it looks like it’ll kick your ass.


The Tony Campos Signature Tremor 5 will be in stores summer 2011.