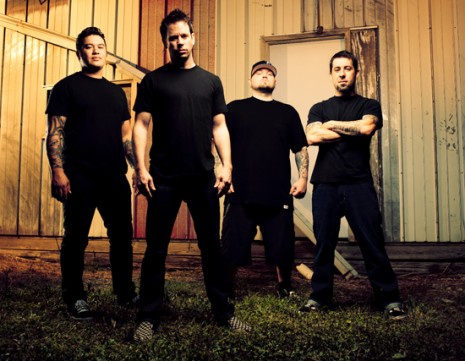 Legendary Christian metal band Living Sacrifice have set The Infinite Order as the title of their brand new album, their first since reforming in 2008 and seventh studio album overall.

“This new record came together great.   I could not be more pleased with the final mixes that Andy Sneap has done.  We dug deep into our thrash roots on this one, I think.  The album title refers to God and the universe.   Man is finite and limited,  our knowledge is limited.  Wrestling with the concept of infinity is difficult, but there is true peace in trusting in God.” Says Bruce Fitzhugh, Living Sacrifice’s front man.

The Infinite Order was produced in Nashville, Tennessee and Little Rock, Arkansas by the band’s longtime friend Jeremiah Scott (The Showdown, Destroy Destroy Destroy). Mixing duties are once again being handled by Andy Sneap (Megadeth, Machine Head, As I Lay Dying), who mixed the band’s last album, 2003’s Conceived in Fire.

Living Sacrifice’s influence runs deep throughout the scene. Former and current members of Living Sacrifice went on to play in bands such as Evanescence, P.O.D. and Norma Jean. Living Sacrifice broke up in 2002 but returned to the metal community with a vengeance in 2008, self-releasing the two song Death Machine digital-only EP.

The Infinite Order announces the return of Living Sacrifice with might and majesty. Powerful, forthright, thrashy and skillfully executed as ever, the album serves as an unapologetic reminder as to exactly why so many of today’s heavy music leaders in bands big and small hold Living Sacrifice and their legacy in such high-esteem

Cover illustrations will be handled by Dave Quiggle, with packaging by the Solid State / Tooth & Nail team.

Living Sacrifice toured as part of Demon Hunter’s “Stronger Than Hell Tour” last summer, followed by Liskfest in Orange County alongside Bleeding Through, Death By Stereo, The Cro-Mags and Gorilla Biscuits. This year, they returned to Cornerstone in Illinois and several other festivals and club dates around the country.

Living Sacrifice’s storied career stretches back to 1989. Bruce Fitzhugh (vocals / guitar) and Lance Garvin (drums) remain from the band’s earliest lineup. Rocky Gray (guitar), also known as the drummer for We Are The Fallen and the former drummer for Evanescence, and Arthur Gray (bass) joined for 2000’s The Hammering Process.