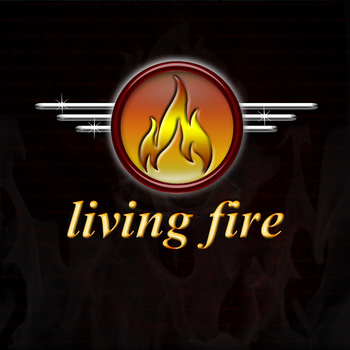 Transmitting the message of the Cross through punk rock with old school-styled adoration lyrics is LIVING FIRE’s objective. The Brazilian band was created in 2005 and in the beginning it was solely an evangelistic project, with no fixed line up.  The musicians participating in events were all invitees, except for the bass and vocals by Luis Medeiros, also bass player for the band Judas O Outro and founder of the project, who states: “In the beginning, it was just for fun. I wanted to record the album because at the beginning of my conversion I had no knowledge of any Punk / Hardcore Christian bands. I didn’t know that, even singing with my accent, the songs would have such an impact.”

In 2011, Luis was joined by Murillo Henrique Xavier and Wesley Farina Chumiski on guitar, and Michel Oliveira who produced the album and played drums.  The songs started to be recorded in July 2011, having as a highlight the opening track named JESUS IS NOT DEAD.  Two cover songs were added to the album: OLD RUGGED CROSS (a Christian music classic) and ONE WAY (maybe Hillsong United’s best known song).  The full song list is:

4.  JESUS CHRIST IS THE ONLY ONE WHO CAN SAVE US

11. REDEMPTION OF HIS LOVE

In January 2012, the band signed up with the SAVED RECORDS label, connecting with PIMENTAS DO REINO SHOP for the album’s digital distribution. In July 2012, LIVING FIRE signed up with THUMPER PUNK RECORDS, a label which helps artists record, produce and distribute music that reflects a positive, Christ-centered message.

With no other intent but to praise the Lord with overwhelming joy and energy, LIVING FIRE strives to adhere to Jesus’ commandments in Mark 16:15, thus transmitting GOD’s word to places where it would not be inserted through conventional means.  JESUS RULES is available for immediate download at http://thumperpunkrecords.bandcamp.com, and through iTunes and other digital retailers.  CD pre-orders are available through the THUMPER PUNK RECORDS webstore (http://thumperpunkrecords.storenvy.com) for shipment in early September.