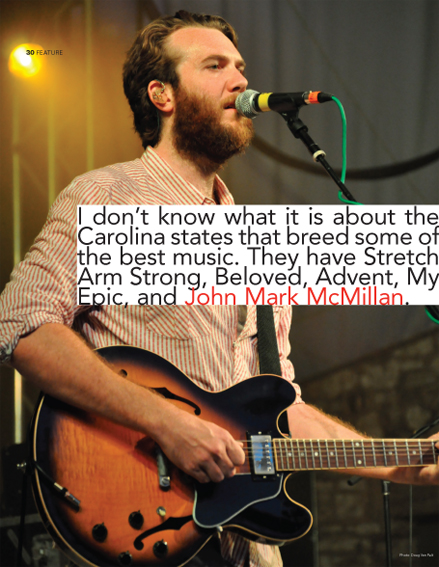 Enigmatic singer-songwriter John Mark McMillan launches the 25-city “The Economy Class Spring Tour: A Mighty Raucous Evening with John Mark McMillan and Friends” that follows the fall release of his widely acclaimed and commercially successful sophomore album, Economy. Available on Integrity Music and distributed by Provident and RED/Sony, McMillan’s Economy became a Top 20 iTunes® overall “LP” hit and was recently tapped by ABC Network for its Grey’s Anatomy promotions. McMillan’s “Seen A Darkness” was featured on the 30-second promo for the show’s episode, “Hope for the Hopeless” (Season 8: Episode 12), which aired on Thursday, January 12 (www.tvfanatic.com).

Music fans will be able to hear more new songs from Economy, as well as fan favorites, on McMillan’s “Mighty Raucous Evening” tour that launches March 8 in Lexington, KY and travels across the Southern and Eastern US hitting New York City, Chicago, Cincinnati, Cleveland, Boston, Atlanta, Nashville, Birmingham and other major markets before wrapping up in Jacksonville April 21.  Special guests at select stops along the tour include The Embers, The Royal Royal, Kye Kye and Jude Moses. For all the tour dates and more details, go to thejohnmark.com, and the tour video trailer can be seen at http://www.youtube.com/watch?v=4jmbrNncjD8.

“The ruckus rolls again in early spring of 2012,” says McMillan.  “We hope to see many of you as we visit your fine cities, sharing new songs, telling new stories and introducing you to new friends.  I hope you will welcome us into your communities and help cause a bit of a scene together for a few hours.  After all, this is something we want to do together, so bring your voice, bring your story and bring your heart.”

Just prior to the launch of the tour, McMillan will host Livestream events Feb. 28, March 1 and March 5 beginning at 10:30 pm EST each night. During the events, McMillan will discuss topics ranging from worship and church to music while live footage of tour rehearsals will be shown on the final Livestream event.  McMillan will also answer questions submitted in advance to the events via twitter (#!MightyRaucousTour) and DiscRevolt (http://discrevolt.com/artists/johnmarkworship/johnmarkworship.html). Each event will also be cross promoted through DiscRevolt, where people can preview videos and more.

McMillan is further connecting with other worship leaders in each tour market through DiscRevolt, handing out cards with redemption codes that the worship leaders then use on the site for exclusive content.

Perhaps best known for penning the anthem “How He Loves” from his acclaimed label debut, The Medicine, McMillan is hailed for his concise, poetic and often “raw” lyrics. A natural progression and a departure, McMillan’s Economy has moved away from the themes of death and resurrection that clothed his debut album to the interior psychology of a man trying to live in the uneasy valley between this world and the next.

“For me, the greatest days—the birth of a child, the success of a career—have always been coupled with the worst ones—the death of a loved one, a friend’s divorce,” McMillan explains. “It’s a tension we all live in.”

On Economy, that tension is electric. From the first drumbeat of album opener “Sheet of Night” (www.youtube.com) to the post-rock cacophony that closes out song and new video, “Seen a Darkness,” there is a palpable weight that permeates the entire project.  It is the music of a man who cut his teeth on Dylan, Kerouac and Springsteen while simmered in the presence of the Father, Son and Holy Ghost.

“With a cracking voice and soaring, fuzzed-out amplification, McMillan stands out as a true worship pioneer,” says RELEVANT magazine about the album that shares the sound of glory and shame, murder and grace, and darkness and daylight in the delicate beauty of “Love You Swore,” the rowdy drawl of “Daylight” and the quiet solemnity of “Murdered Son.”

For those following the North Carolina-based songwriter’s steady rise as an artist, Economy, produced by Jeremy Griffith and Joel Khouri, accompanies McMillan’s searching, searing vision of a world that is “not as it should be.” But it’s not just a broken world that McMillan is singing about. With Economy, he’s pointing across the horizon to the hope of something much more than “broken hearts and counterfeit currency.”

Additional information on McMillan, including tour updates, can be found at thejohnmark.com, www.facebook.com/TheRuckusRoom.