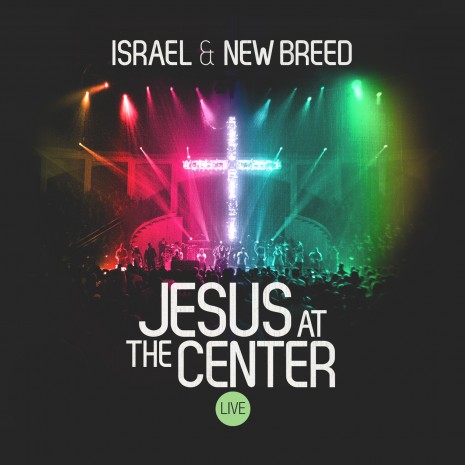 Leading up to the release of the album, Israel appeared on ABC’s “The View” July 24 as part of The King’s Men tour group interview and performance. He also taped BET’s “Bobby Jones Gospel” and “Lift Every Voice” shows to run this fall (check your local listings for times), and will appear with The King’s Men on BET’s “Sunday Best” finale episode Sept. 2. He is further scheduled to make appearances on FOX’s “Good Day Houston” today and WGN TV’s “Morning News” Aug. 22.

Recently featured on Yolanda Adams and Tom Joyner radio shows, Israel & New Breed is also gathering significant airplay across the nation with its Jesus At The Center hit singles. The song “It’s Not Over (When God Is In It),” featuring acclaimed vocalists Jason Nelson and James Fortune, is a Top 12 Gospel Monitored hit and climbing while the Christian AC single, “Your Presence Is Heaven” produced by Ed Cash (Chris Tomlin, Britt Nicole), is rapidly climbing the charts, gathering airplay on the KLOVE Radio Network, KTIS/Skylight Satellite Network, Sirius/XM, KSBJ (Houston), WAKW (Cincinnati), WBSN (New Orleans) and many more.

As broadcast media continue to feature Israel & New Breed, and with covers or features in Associated Press, Charisma, Gospel Today, CCM, Worship Leader, All About Worship and more, the music critics are similarly offering their applause:

“Israel & New Breed…led by singer Israel Houghton, provide many superb praise and worship songs on their new album, Jesus at the Center. Houghton co-wrote the majority of songs on the double-disc album, offering solid, upbeat

gospel tunes that are fused with jazz and rock melodies. The 21 tracks…flow easily as the group delivers a series of

“Like efforts past, [Jesus At The Center] consists of two main movements. The first one is a praise-fest featuring a string of high-octane numbers, running the gamut from corporate choral praise (“Jesus the Same,” “More Than Enough”) and contemporary gospel (“No Turning Back”) to Latin electro-pop (the Pitbull-esque “Te Amo”), and even a gospel-ska hybrid (“Rez Power”)… the second movement, a stretch of worshipful, impassioned slow-burners that segue right into one another.” – AllMusic.com

“A vision that has been stirring for 12 years and is finally coming to fruition in a worldwide release featuring soulful gospel, crossed with contemporary worship, Latino zest and shaken up with a rockin’ funk.” – CCM

“With this album, Israel Houghton delivers another must-have live worship project…Jesus at the Center is fresh, relevant and masterful.” – watchgmctv.com

In addition to the Jesus At The Center two-disc album, a companion DVD recorded live in high-definition featuring all 18 songs along with behind the scenes footage, story behind the song vignettes and other bonus material, is available at retail now. An exclusive iTunes® LP also releases and includes not only the new music, but also video Work Tapes, a Photo Montage, chord charts and the “Jesus At The Center” video tutorial. Walmart is featuring the project as part of its “Gospel Music Heritage Month” promotion in 530 stores, and a buy link for the album

Co-writing all the songs, except the Bob Dylan cover, “To Make You Feel My
Love,” and “You Have Me,” by Michael and Lisa Gungor, Israel says, “The
overarching story of the album is that sometimes we can be so ‘churched’ that we
can lose sight of the ‘who, what, why’ of worship. This project simply places Jesus where he is supposed to be. We intentionally removed the metaphors and simply focused on his name.”

Taking the message and music on the road, Israel Houghton will share the stage for the very first time with peers Kirk Franklin, Marvin Sapp and Donnie McClurkin on The King’s Men tour. The 15-city major market US tour begins Sept. 16 at Comerica Theatre in Phoenix and travels coast-to-coast through Los Angeles, Chicago, Houston, Atlanta, Washington, DC and more before culminating in Brooklyn, NY at Barclays Center Oct. 14. For all the tour dates and ticket information, see www.livenation.com.

Prior to The King’s Men tour, Israel & New Breed presents their annual Deeper Conference 2012, which will be held Aug. 29 through Sept. 1 at Lakewood Church and Grace Church of Humble, TX. Hosted by Israel, the worship conference features guest speakers Jentezen Franklin, Steven Furtick and Darlene Zschech. For all the details and registration information, go to http://deeperconferences.com/speakers.

In 1995, Israel and Meleasa Houghton founded New Breed Ministries, an organization they continue to run and that is comprised of noted musicians and singers who serve within their respective churches and together serve the Church at large. Since then, Israel & New Breed has amassed a legion of followers that crosses generational and African American, Latin and Caucasian listener lines. While blasting down barriers, Israel has been fittingly graced with 2 Gold-selling albums, 4 GRAMMY Awards, 12 Dove Awards, 2 Stellar Awards and a Soul Train Award.

Active as worship leader in his local church, Joel Osteen’s Lakewood Church (Houston), Israel has served as worship leader at Hillsong conferences and Franklin Graham crusades. He has written or co-written 11 CCLI Top 500 favorites, been featured on The Tonight Show with Jay Leno, accompanied Alicia Keys at the 2007 MTV Video Music Awards for a performance of George Michael’s “Freedom ’90,” and performed at the 50th Annual GRAMMY Awards. He uses his own multi-cultural upbringing as a reference point with a desire to draw people of all races, ages and cultures together. More information on Israel & New Breed is available at www.newbreedmusic.com.