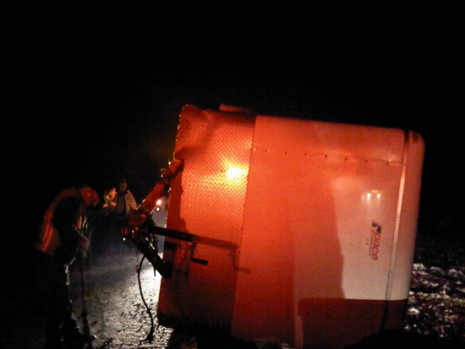 On March fourth Myrtle beach’s Hundredth was driving South on a cold winter’s night on the deadliest road in Oregon, between Bend and Klamath Falls, heading to California on the last leg of their full U.S. Winter tour. On this routine night drive guitar player Alex Blackwell and bass player Michael Raymo screamed, startling the other members in the band, as they slid sideways on the iced-over highway 97. As the van slid, the trailer flipped off the road and on its side. Luckily a local stopped to help and to the band’s surprise had heard of Hundredth. While waiting for the tow truck in the van with their new friend they laughed about what had just happened. After finding out everything was okay and nothing had been broken, talking about what had just happened was very light hearted,  but all the laughter stopped once they got the bill from the tow truck driver four hours later. They slept in the van waiting for the ice to melt some and headed their way into sunny California.

Pre-order orders are available  today for Hundredth debut CD, When Will We Surrender at mediaskare.com