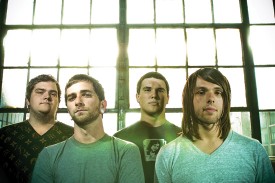 Indianapolis IN Gwen Stacy has announced they have signed with Solid State Records (Underoath, Norma Jean).  The band will release their new full-length A Dialogue with the label on October 20th.  The track listing for the album is unveiled below.  A video for the song The First Words is currently being shot by Jeremy Jackson.

The band’s previous album The Life I Know (2008) was released on Ferret Music and debuted on the Billboard “Heatseekers” Chart.  The album was hailed by media touchstones like Absolute punk.net who claimed “if you need something to kick your current music rotation in the (bleep), then The Life I Know is what you want to check out.”

The band has toured nationally numerous times including stints with The Devil Wears Prada, Unearth, Scary Kids Scaring Kids, Drop Dead, Gorgeous, Poison The Well, Maylene And The Sons Of Disaster, 36 Crazy Fists and Haste The Day. A national headlining tour around the album release will be announced shortly.  www.myspace.com/gwenstacy