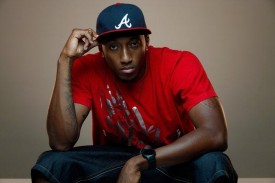 at the Fox Theatre in Atlanta on April 19 at www.ticketmaster.com

The GMA revealed today that the co-hosts for the legendary awards ceremony will be David Mann and Chonda Pierce.  David Mann is best known for creating the famous comic character Leroy S. Brown who stars in Tyler Perry’s popular Meet the Browns television series. Mann’s “Leroy S. Brown” has kept audiences across the nation laughing in the blockbuster Madea movies.

Daytime EMMY nominated comedian Chonda Pierce is known for her sharp Southern wit starred in her own live national television special This Ain’t Prettyville! on CMT (Country Music Television). Pierce is the author of six books, including her most recent Laughing In the Dark (Simon&Schuster /Howard) and she ranked among Pollstar’s top-selling live performers. Her comedy is regularly featured on XM and Sirius satellite radio.

The 43rd Annual GMA Dove Awards will take place on April 19 at the Fox Theatre in Atlanta.  The award show is produced by the Gospel Music Association (GMA) to offer the most comprehensive platform celebrating Christian and Gospel music.  The awards ceremony will be nationally televised on GMC TV on April 24 at 8:00PM ET.

“The GMA Dove Awards represent Gospel and Christian music’s biggest night of the year and there is no better place for the broadcast of this event than GMC TV, America’s home for the best in uplifting music and entertainment,” said Charles Humbard, President and CEO of GMC.  “We are proud to host this celebration at the Fox Theatre, one of America’s premiere venues here in our home town, Atlanta.”

The public is invited to purchase tickets to see and experience all of the performances and awards ceremony live at the Fox Theatre in Atlanta on April 19 at www.ticketmaster.com. Last year, the popular event sold-out and was one of the hottest tickets in Atlanta.

For more information and the complete list of nominated artists, please visit www.doveawards.com

***Credential requests for publicists and media outlets for the 43rd Annual GMA Dove Awards can be submitted to aarnold@rogersandcowan.com

Founded in 1964, the Gospel Music Association serves as the face and voice for the Gospel/Christian music community and is dedicated to exposing, promoting and celebrating the Gospel through music of all styles including Pop, Rock, Praise & Worship, Urban Gospel, R&B, Hip Hop, Southern Gospel, Bluegrass, Country and more. The GMA community membership consists of agents, artists, church leaders, managers, promoters, radio personnel, record company executives, retailers, songwriters and other industry visionaries. The GMA produces the GMA Dove Awards and IMMERSE. For more on supporting the GMA or becoming a member, please visit www.gospelmusic.org or contact the GMA directly at 615.277.1376. www.facebook.com/gospelmusicassociation

About the Fox Theatre:

The historic Fox Theatre is one of Atlanta’s premiere venues for live entertainment. The Fox’s 4,678 seat theatre is booked more than 300 performances a year ranging from Broadway to rock to comedy to movies. In December 2009, Billboard Magazine ranked the Fox Theatre in Atlanta as “The #1 non-residency venue worldwide for the decade (5,000 seats or less).” The Fox Theatre is located on Peachtree Street in the middle of the city. Not only is it on the National Historic Register, but it is one of the most beloved landmarks in the city because it is a real memory maker for the citizens of Atlanta. They may have come here to see their first performance or Broadway show; they had their first date here, and maybe even had their first kiss in the balcony. Our ballrooms are spectacular and have hosted everything from Sweet 16s to weddings and corporate events.

GMC (www.watchGMCtv.com) is America’s favorite television channel for uplifting music and family entertainment. The Parents Television Council™ has twice awarded its Entertainment Seal of Approval™ to GMC for being “an authentic family-friendly cable network.” GMC is the only television network brand to be so honored.  In 2011, GMC was the second fastest growing ad supported cable network in total day households and A18-49. GMC can be seen in more than 51 million homes on various cable systems around the country, as well as DISH Network on channel 188, DIRECTV on channel 338 and Verizon FiOS on channel 224. Follow GMC TV on Facebook and Twitter at http://facebook.com/gmctv and http://twitter.com/gmctv.