Get a free download from Dinner and a Suit 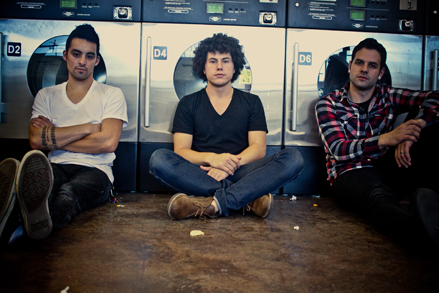 Dinner and a Suit – Since Our Departure

Known for their explosive stage performances and unique sound, and beloved by their fans across the country, the Nashville-based trio Dinner and a Suit is a darling of Internet critics and a favorite on the Warped Tour. With an indie pedigree like theirs, many musicians would play it safe.  But instead, South Jersey natives Joey Beretta, Jon Capeci and Anthony Genca have boldly released Since Our Departure, their most ambitious work to date.

Simply put, Since Our Departure is the story of the band’s journey: the hopeful challenge of leaving the comforts of home to pursue a dream.

To record Since Our Departure, the band split their time between Glow in the Dark Studios in Atlanta with producer Matt Goldman (Anberlin, Underoath), and Tyler Orr (As Cities Burn, Rookie of the Year) at First Street Studios in Cleveland TN.  The result is the group’s most powerful recorded work so far, capitalizing on their strengths- melodies, hooks and energy.

Universal themes of forgiveness and hope, love and loss, and discovering your place in the world fill Since Our Departure. The songs resonate deeply with the human needs we all have. Our hopes and dreams are all represented here in glorious fashion.

“We arrived at First Street Studios with two finished songs in hand and before we knew it, we’d created an album full of music we love,” said Jon,  “It just sort of poured out of us.”  Bassist Anthony, added “I feel like there’s a lot of passion and energy on this record and I can’t wait to play the songs live so we can show you that.”

Jon and Joey are cousins and grew up hearing the story of their Great Grandmother, the daughter of Italian immigrants, who worked at a factory making suits during the Depression and World War II.  When suits were damaged and couldn’t be sold, the factory would discard them.  The family’s matriarch got the idea to salvage the clothing, repair it, and give them to needy people in her community, pastors and missionaries, or friends and family looking for work.  Visitors would leave her home with bellies full of pasta and a suit tailored just for them…Dinner And A Suit.

Following this family legacy, Dinner and a Suit has committed to donating 10% of the album’s profits to different social action non-profits.  As Joey explains, “We’re thankful to come from families with a legacy of generosity and we’re as committed to continuing that legacy as we are to anything else.”

So, with undeniably catchy music and hearts of gold, what is the one problem with Dinner And A Suit?

If you find one, let us know.

Here’s the tune for your listening pleasure:  Where We Started
(If you just wanna hear/stream it, left-click on that link. If you wanna download it, right-click on it and “save target as” onto your hard drive.)