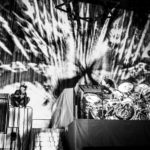 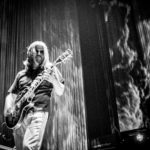 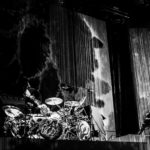 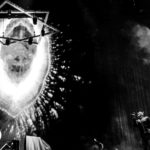 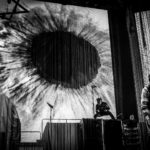 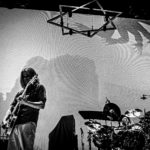 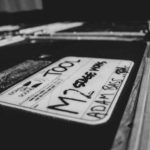 Tool isn’t Tool anymore. Tool is TOOL, the collectively-owned entity that exists as an extension of its congregation. They’re an experience, a noun whose composition is equal parts self-creation and public consumption. Even with their own creative choices – half of the show shrouded behind a veil; their hyper color visual manifestations engulfing the stage; vocalist Maynard James Keenan performing recessed on the back half of the stage for the entirety of the show – they welcome the denial of their own and nearly force the audience, like a haunted house, to enter in and take part in the concerted experience.

Like Pink Floyd’s The Wall, it isn’t a time to go in, watch the band perform a few songs, mosh around a little bit, and get home to watch Netflix. It’s an event. It’s a theatrical journey. It features every bit the ebbs and flows of a perfected narrative, the experience mirroring the band’s extended song times and roller coaster dips and climaxes of a storyline. It was timed to the minute, every song with its equivalent visualization, a demonstration of the flawless control Tool has over their sound, their image, and their audience.

The tour – aptly dubbed the Fear Inoculum Tour – likewise featured some of the band’s latest work. The show, in its entirety, was a healthy mix of Fear Inoculum and their previous breadwinners. (Standout from the new album that night: “Pneuma.”) Noticeably absent the Sobers, the Eulogys, the Lateraluses, but the “Parabol / Parabola” combination, “Ænema” and “Stinkfist” hits, and even a nod to their beginnings with Opiate’s “Part of Me” (from 1992!) making appearances. Extremely impressive in their talents, the band played every part of their tracks live, including the important details of their paintings like the openings to “Fear Inoculum” and “Stinkfist.” In an age where perfection is attained through Photoshop and post-production and where skill is computerized, Tool doesn’t bend the knee. For example, at one point in the performance, guitarist Adam Jones’s instrument went out; oddly, it only served to highlight the mastery he has over his craft. You would have sworn there was a backing track in there somewhere contributing to the layers and complexity of his output. Instead, it was dead silent. Even in these missteps, Tool shined.

Once you get on the train, the band has such magnificent control over the experience, they could have taken the audience anywhere and everyone would have been giddy to ride. The show itself was in excess of two-and-a-half hours, but the band only played 14 songs – and it didn’t matter. It felt like 30 minutes. There was a 12-minute intermission that would conventionally lead to an encore, but the three songs they played following felt more like a second act than an encore.

Some may consider Fear Inoculum itself to be the band’s second act. After 13 years away, they’ve shown no sign of apathy or slack. The album landed at No. 1 on Billboard’s Top 200, bred midnight lines at retail stores the likes of which haven’t been seen in decades, garnered legitimate critical acclaim, and won approval from the people who spend hard-earned American dollars on the music. We can only hope it’s the start. Will they put out another album? Maybe. They’re decidedly aging, though the output doesn’t reflect that. They waited a decade to write a new album, and timelines don’t seem to apply to Tool. So instead, let’s just get on the bus and enjoy the ride Tool creates. Let tomorrow be tomorrow, even if tomorrow doesn’t come for another 13 years.

And PS – for all your drum nerds out there, yes, Danny Carey gets the stage to himself for a spectacular display of his talent… making us all realize we’ll never be as good at anything as Carey is at drumming.