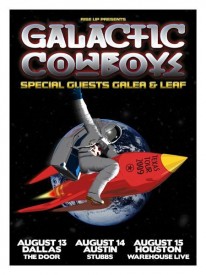 Galactic Cowboys are actually reuniting (after way too long an absence) for three shows. I caught up with frontman Ben Huggins to ask him a few questions about these events. Here’s what he had to say.

Why are you reuniting for these 3 shows? What led to this reunion?
Doug, I’ve been wanting to do this for quite a while. Back in May Monty (Colvin, bassist) emailed me and said he’d like to try to do some shows and I jumped all over it.

How is the band sounding in rehearsals?
Each day we get a little tighter. That’s a good thing! We’re all tired, but it’s a good kinda tired!

What does this mean for a possible future reunion with new music, etc?
Monty and I have thrown some ideas back and forth in emails. But, as far as a disc or something like that, we haven’t really gone that far. Right now we’d just like to make sure we can still pull in a crowd and then live up to the task of “rocking their collective butts.” Nothing is planned past August ’09. But, I assure you, if anything more begins to churn I will be sure to keep you abreast of the sitch!

What songs are you most looking forward to playing?
Looking forward to playing…. Hey, wait a second! You’re trying to get me to give away the set list aren’t you? You’re a tricky one, Mr. Van Pelt. Tricky indeed! If you want to know what we’re playing you’ll have to come to at least one of the three Texas shows. Thursday august 13th in Dallas at the Prophet Bar, Friday August 14th in Austin at Stubbs, or Saturday August 15th in Houston at Warehouse Live!

Which songs (if any) scare you about playing/make you nervous? Why?
I’m feeling more confident about our 10 year absence after having a few rehearsals under our belts. It’s going to be great!

Anything else you’d like to say?
You still have a day left to plan. More than one day if you’re coming to Austin or Houston. So, GET TO TEXAS AND SEE GALACTIC COWBOYS PLAY! It may be your last chance!!!