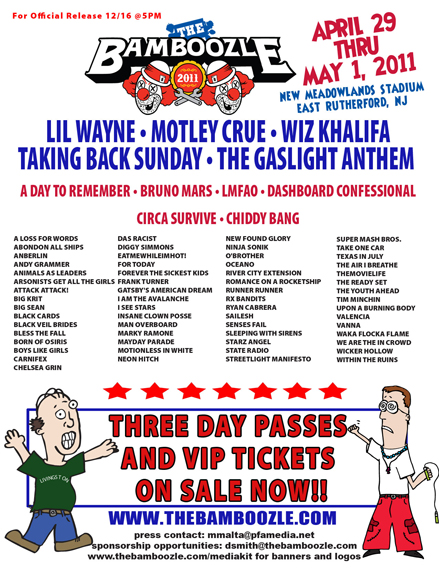 These bands will be joined by previously announced main stage performers including A Day To Remember, Boys Like Girls, New Found Glory with Marky Ramone, Circa Survive, Waka Flocka Flame, Streetlight Manifesto, and the RX Bandits. Tickets for three-day packages are currently available for purchase. For ticket information as well as additional artists announced please visit: www.thebamboozle.com.

In addition to performances, The Bamboozle Festival will feature several events that attendees won’t want to miss. Making its debut this year, The Temple of Boozle will host some of the hottest DJs in the country including Super Mash Bros. and Wait What, among others. Returning events will include The B-Boy Battle, a breakdancing battle, held on the stage of the same name where the grand prize is the largest cash prize to ever be awarded for a breakdancing competition in the United States. In addition, The Break Contest will also be returning which, since 2005, has been the official unsigned band competition of the festival. The winner will receive a performance slot on the main stage and other prizes. Last year, The Break Contest expanded from its home in New Jersey, reaching out to include New York, Pennsylvania and Connecticut. Dates, cities and venues will be announced shortly. Keeping with the tradition of getting fans involved, this year the festival also held the “I Booked Bamboozle” contest where fans were invited to suggest bands for the 2011 lineup.

The Bamboozle Festival has become a staple of the music festival circuit drawing over 80,000 fans. Since its inception in 2003, the festival has consistently featured the best music talent from established to new artists spanning multiple music genres. Always ahead of the musical curve, The Bamboozle Festival has previously featured up-and-coming acts who have gone on to become break out artists in their own right including Fall Out Boy, Paramore, My Chemical Romance, Jonas Brothers, and many more.

More confirmed performers will be announced shortly for The Bamboozle Festival, as well as information about The Bamboozle Roadshow 2011.

**SEE above embedded FLYER FOR LINEUP ANNOUNCED SO FAR!