For King and Country to perform benefit 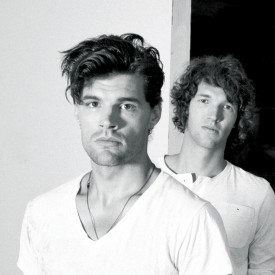 For King & Country in Concert at Christ’s Church at Mason
Cincinnati, OH (March 2013) – With a whirlwind of success in 2012 and on the heels of wrapping up a headlining tour, for KING & COUNTRY started the year with a debut on NBC’s The Tonight Show with Jay Leno and an appearance on Access Hollywood. Presented by Star 93.3 and Christ’s Church at Mason, the band will make a local stop for a concert at Christ’s Church at Mason on Sunday, April 28, at 6 p.m.
In addition to an exciting night of music, the concert will also give everyone in attendance an opportunity to support for KING & COUNTRY’s Respect & Honor campaign, which will benefit a great local cause. Half of the ticket sales will be going to support the ministry of the Abuse and Rape Crisis Shelter of Warren County.
Brothers Joel and Luke Smallbone, the duo known as for KING & COUNTRY, share the meaning behind their Respect & Honor bracelets by saying, “This is a message especially for ladies. Often our culture says to talk and to act and to dress like you are worth nothing more than a penny. But there is a God who says you are priceless.”
Christ’s Church at Mason’s lead pastor, Trevor DeVage, says, “Our church is honored to partner with for KING & COUNTRY and other men in the cause to stand up and to treat women with respect and honor.”
Over the past year, for KING & COUNTRY has continued to amass accolades and accomplishments. Amazon.com recently announced their “Best Music of 2012” list and named “The Proof of Your Love” as Christian Music’s Song of the Year. Billboard named them as one of 17 acts to watch in 2012. In February of 2012, for KING & COUNTRY released their album, Crave, which earned them the honor as CCM’s bestselling new artist of 2012.
for KING & COUNTRY’s hits include “Busted Heart” (Hold On to Me), “The Proof of Your Love,” and “Middle of Your Heart.” Listeners who like Coldplay, Snow Patrol, and Kings of Leon will also enjoy their music.
Tickets go on sale on March 10 and are $10 in advance. Tickets may be purchased at the church office, located at 5165 Western Row Road in Mason, online at iTickets.com, or charge-by-phone at (800) 965-9324
Tickets are $12 at the door. Doors for the show open at 5 p.m. The band will also be featured at Christ’s Church at Mason for Sunday morning services at 9 a.m. and 10:30 a.m.
Visit
www.forkingandcountry.com for more about for KING & COUNTRY. Christ’s Church at Mason is online at www.ccmason.org. For more information, contact the church office at (513) 229-3200.