May 20th At The Palladium Ballroom in Dallas, TX 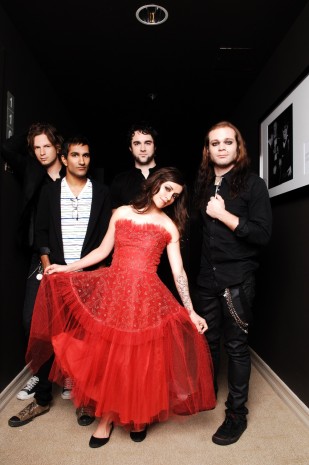 Platinum-selling alternative hard rock quintet FLYLEAF will gather fans for a special benefit concert in honor of their longtime soundman Rich Caldwell on May 20, 2012 at The Palladium Ballroom in Dallas, TX. Sponsored by 102.1 The Edge, KDGE, tickets go on sale for the show May 4, 2012. [https://tickets.axs.com/eventShopperV2.html?wr=f3f793b9-057b-4839-ac5e-0533a3eb4a1d&skin=palladium&preFill=1]

Everything the group does is out of love and passion, and this night stands emblematic of that. Caldwell was in a fatal car accident near his home in College Station, TX. As soon as the band heard the news, they wanted to do something to both honor his memory and raise money in order to support his family. Caldwell is survived by his wife Katy and two-year-old son Kirby. All proceeds from the show will go directly to Katy and Kirby aiding them in the aftermath of this tragedy.

For FLYLEAF, their friend and brother’s light still shines brilliantly. Beyond his talents behind the board, he was a crucial part of the band’s family. They did everything together, and his spirit and memory will forever be a part of FLYLEAF.

About Caldwell, singer Lacey Sturm comments with a heavy heart, ” Rich was our brother. His life and love have forever changed the world for the better. From the first showcase we played, every heart we touched with Flyleaf’s music was as much Rich’s victory as it was any band member’s.  There is not one person behind the scenes, or on stage, who deserves to be honored more than Rich Caldwell. I’m only sorry that the honor we are giving is so overdue.”

Guitarist Sameer Bhattacharya echoes that sentiment, “It’s hard to believe that this is real. Rich was like the sixth member of Flyleaf. He was our brother and dear friend. We’re here for Katy and Kirby, our family. We want to help in any way we can.”

Please come out and remember Rich Caldwell with FLYLEAF on May 20, 2012.

With Caldwell on their minds and in their hearts, FLYLEAF is currently in the midst of recording their follow-up to 2009’s Memento Mori due in stores this summer via A&M/Octone Records.