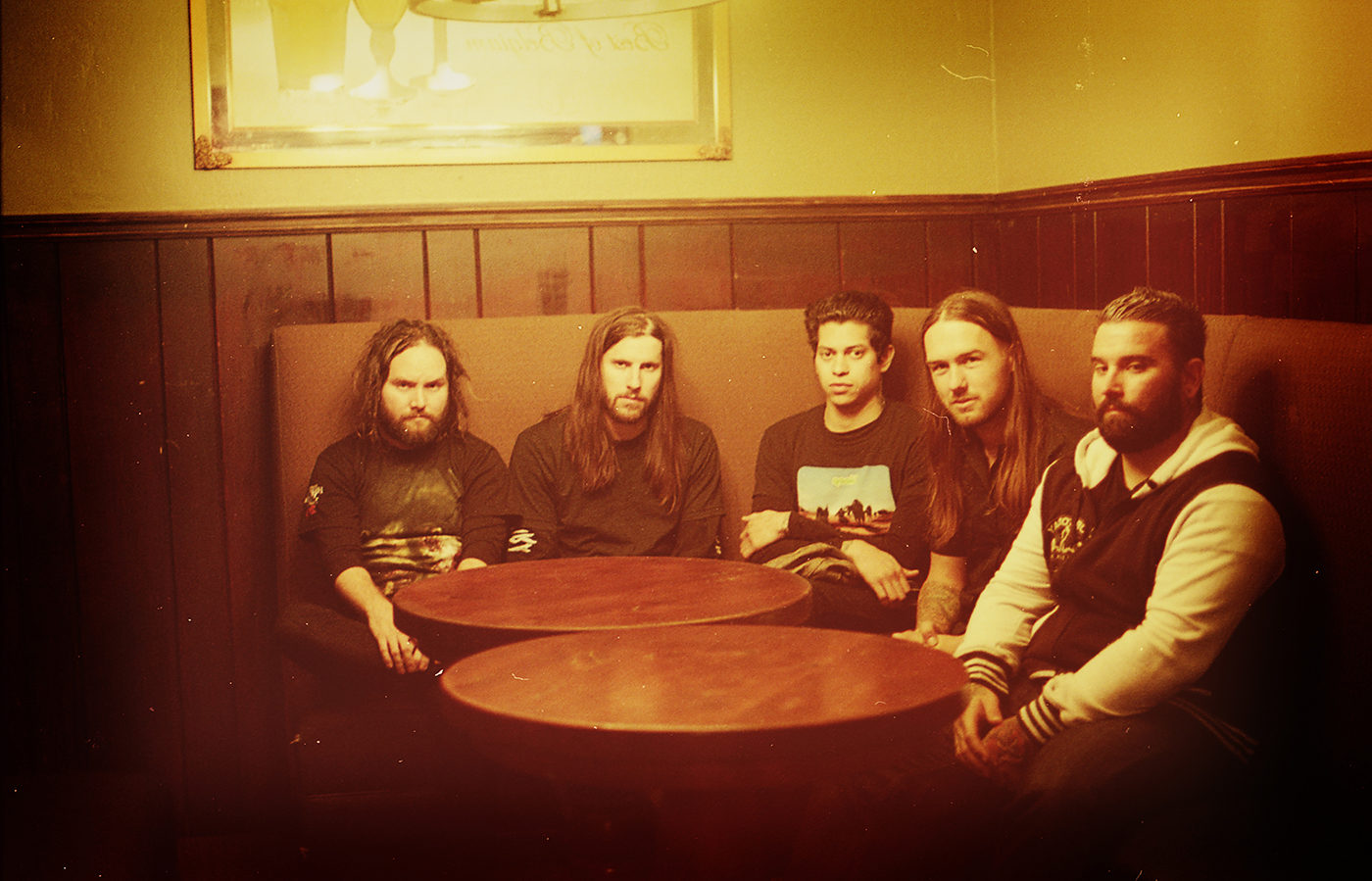 As I was getting ready to interview Impending Doom, going over my questions, thinking about where I could see the interview heading, I had no clue know what vocalist Brook Reeves was experiencing while I was planning our chat.

A working man and now newly a family man, he had just left work and was on his way home to help his wife take care of their newborn son. The man who screams his lungs out amidst deathcore riffs and severe headbanging held his precious child in one hand and the phone in the other, eager to talk about the group’s latest record, Death Will Reign.

It’s been a grind for the band – basically since 2007 – of constant touring and recording, and only until recently did Reeves and the rest of the group get a bit of time off. They were fortunate enough to take time off for Reeves’ wife to have their child, and he’s gone back to what he calls “regular work.”

Reeves talked about how he has been getting back into the swing of things with Impending Doom, bringing it back to when the band first started. “(Founding guitarist) Manny Contreras had been out of the band for a while,” Reeves said, “and he’s the one I started Impending Doom with back in high school. He’s back in and we actually wrote this record with him.”

We started out focused on the grinding, really heavy death metal, particularly on our first record, but we’ve always loved this ambient, dark aura for our music. So we tried to go more that route and I think it works.

The band’s sound has changed over the course of the five albums they’ve now released, and Reeves is aware and thankful for some of the changes they’ve experienced. “With the death metal I grew up listening to, it had this sludge feel with a solid groove all the way through it,” he said. “That’s where I got a lot of my inspiration. Nowadays, bands like that are a dime a dozen, and you’ve really got to look for the best ones out there. I hope we stand out more in a Godly way more than any other way. We started out focused on the grinding, really heavy death metal, particularly on our first record, but we’ve always loved this ambient, dark aura for our music. So we tried to go more that route and I think it works. We’ve all been on board for a darker, heavy presence, rather than the route we started out with.”

Death Will Reign builds on the changes the group has made throughout its past few albums, and even listening to the band’s debut, Nailed. Dead. Risen., from back in 2007, you can hear some of the influences Reeves referenced, like on the track “My Own Maker.” It features lots of speed metal and heavy breakdowns, characteristics heard throughout the band’s discography, but not in such a clean and focused way. “I like bands like Nine Inch Nails and Radiohead, along with Slipknot or Korn,” Reeves said, “and those have always influenced me in my writing – and even our band’s sound, keeping that darker, theatrical feel around us. That’s what we try to do each time. When we write records, I write from wherever I am with my walk with Jesus at that time. I don’t try to make it Mr. Macho or anything. We’re not trying to be something we’re not. It comes out very dark, but also very hopeful.”

Reeves also discussed the addition of a friend, Greg Wilburn (vocalist for The Devastated), to record the high screams for the titular track. He spoke on the fact that Wilburn added a diversity to the song they really wanted, and was able to make the track stand out as a pinnacle on the album.

The album is heavily influenced and built on the struggles of this life, Reeves said. Through having a baby and a family at home and working constantly, he wanted to express what he was feeling through this record. “My heart goes out to the people who are grinding, and to the people that are tired, beaten down, they don’t have anything, they’re spiritually broken. I’m right there with them. I’m not the richest guy in the world; money is tight. When we’re on the road, I see a lot of kids and my heart goes out to them, but now when I’m home, I see the struggles at home, with families without God, without that hope, without Jesus. And He’s blessed me. We’ve always been blessed. We’re on our fifth record. He always comes through for me, in the craziest ways, in ways I could never even imagine. We need Jesus, more than ever, in all of our struggles. Coming from a musician (and now) also as a family man, we need Jesus. That’s the concept of this record.”

When we’re on the road, I see a lot of kids and my heart goes out to them, but now when I’m home, I see the struggles at home, with families without God, without that hope, without Jesus.

Reeves feels heavily in his heart for the struggles that people go through, and so much of Death Will Reign discusses those very struggles. But just because he’s the one on the stage, it doesn’t mean he doesn’t have issues. “People sometimes think that because I’m in a Christian band and I tour and I talk about Jesus on stage all the time that I don’t have problems,” he said. “I do. I do fall. I try my best to walk a really faithful life, in God’s grace. The record really hits on that topic a lot.”

It’s evident in the lyrical content of the title track where Reeves was mentally during the recording of the album. “There’s a lyric in the track where it starts ‘My life is a constant war / my life is a constant fight,’ and every time I turn around, I can choose to follow the temptations. Even I get a lot of little jabs at me about being a Christian, and the song came from a place where death will reign upon all that sin, all those things that bring you down. I like when people try to figure out what we mean by the songs, and a title like Death Will Reign can feel different for everyone. It’s a focus on the things that aren’t Christ-like, and death will reign on it.” The essence, Reeves agrees, is “without Christ, death will reign.”

The recording process for Death Will Reign was different for the band, as producer Will Putney (Stray From The Path, For Today, Miss May I) recorded the whole band (except for Reeves) up in New Jersey, and then flew down to Texas to meet and record with Reeves at home. “Will was super cool about everything, and … he just makes this record sound so huge. We’ve known him for a while, and he’s been putting out nothing but great stuff. They’re just all gold, and he’s got a great work ethic. He was very interested, so much so that he asked for our pre-production tracks – no one else we’ve worked with has done that. I don’t know anyone that would fly down here, and wait for me to get off work late and record with me until 3 a.m. It was just awesome.”

In fact, during the recording and writing process, Putney gave Reeves pointers all across the board, and according to the vocalist, it was a give-and-take process.

“It was amazing to have someone who worked just with me and, while he’s not a Christian, he was convicting me. There were times where I took a step back and I’m thinking, ‘Dude, he’s preaching at me.’ God is using him. He wouldn’t do it deliberately, but he’d go straight biblical on me. And it ended up being incredible.”
In 2011, Impending Doom left Facedown Records and joined Entertainment One (eOne) Music, and Death Will Reign is the band’s second full-length release on the independent label. Discussing the departure from Facedown, Reeves was candid in his response. “Simply put, our contract was up with Facedown, and I can’t say enough about them. One of the most respected labels out there. The best people. But we really wanted to go on a bigger scale, and eOne had the resources for it. That’s part of why we were able to work with Will, and the production value is even more important at eOne, and that was big for us.”

I really just want people who hear our music to know they have a purpose. To know that Jesus loves them, more than they love themselves.

Speaking to the band’s mission, Reeves wears his heart on his sleeve, and he speaks for the band when he says, “I really just want people who hear our music to know they have a purpose. To know that Jesus loves them, more than they love themselves. My whole life I’ve always seen people that are broken and strung out on drugs. I always wonder what possesses people to give up everything that they have for a drug. Like, when God gives us the choice between heaven or the gutter, we will pick the gutter every time. I just want to be part of band that says no. It’s sad that sometimes we love to watch the train wreck of people. We want to offer Jesus more than anything. Yeah, we want to sell T-shirts and merch and stuff, but when I compare the two, it sounds stupid to mention a CD or a shirt over the kingdom.”

Impending Doom, and particularly Reeves, looks up to other bands in the genre and appreciates what they do for furthering the metal scene. We got the chance to talk about who they’d love to work with, if anyone, and Reeves is right on target with a band like Oh, Sleeper. “Dude, Micah (Kinard) is a beast. That guy is so in tune with God and I really kept in touch with him over the years after we toured with Oh, Sleeper. He’s a super knowledgeable guy, very passionate about the Lord and the kids. He’s doing it for the right reasons.”

When it comes to the music industry, Reeves wants more loyalty and integrity to come out among bands, particularly in the metal scene. “Everyone wants to be a rock star now. Everybody wants the million-dollar check. They want to do whatever they can to make it to that point, and sometimes that involves crushing friends of 10 years. Or when they make money, they become completely different people, even Christians. Deep down inside, we’re all sinners. We all fall short. But people put themselves on a pedestal. You’re expected to be on your A-game at all times. I just want a little more loyalty, honesty and integrity. If that happened, there’d be more honest musicians rather than pop stars that are all dolled up, fake and plastic. Greed is such a powerful thing.”

Death Will Reign is a mature step for Impending Doom, allowing them to cover broader topics and allow Reeves to show his heart through his writing with the group. The album is heavier than any of their previous material, and it’s almost a perfect blend of the intensity of their debut with the conscious lyrical content of their more recent material. Ranging from different styles like speed-metal or outright deathcore, there’s one thing that Impending Doom focuses on: their mission to reach the world, in whatever way God calls them. As Reeves said to me, “I live Jesus, I die Jesus. That’s pretty much how it’s going to go.”

Impending Doom was posted on November 6, 2013 for HM Magazine and authored by Justin Mabee.