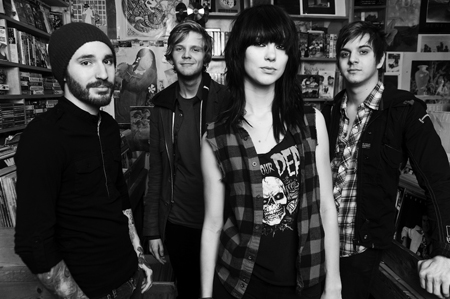 After an triumphant year, inking a label deal with End Sounds and the release of their debut album, For Your Consideration, Montgomery, AL’s female fronted alt-rock band, EVOLETT will bring in the New Year embarking on their first co-headlining tour with Page 9.  The one-month tour kicks off on January 1st at Eisenber’s in Plano, TX (dates listed below).

The foundation of EVOLETT was forged in 2008, and today Brightwell, guitarist Adam Jessamine, guitarist Russ Daly, and bassist Jake Sloan stand ready to take the band to a lofty level.  With their album now complete, EVOLETT is ready to meet the world head-on.  College radio has already has shown immense support for the band with a total of 133 stations putting the album into rotation including CILU in Ontario, WPTS in Pittsburgh, WUIC in Chicago, KPSU in Portland, OR, WSHL in North Easton, MA, WXIN in Providence, RI, WTBU in Boston and WNSU in Ft. Lauderdale. EVOLETT reached the Top 30 playlist at three stations: WARG in Summit, IL (peaked at #1), WBWC in Berea, OH (peaked at #6) and WMCX (peaked at #15).

Standout tracks include EVOLETT’s lead single and fan favorite, “The Compromise,” which a music video is in the works with a debut set in the New Year.  Another favorite is “We All Fall Down”, a rocking reminder to keep our own faults in mind when judging others and “Genetic Makeup,” an emotion-packed tune inspired by the relationship lost between Brightwell and her estranged father.

EVOLETT is ready to leap headfirst into hardcore touring mode in the New Year, supporting their debut release, and spreading their blend of the heavy and the heady wherever they go.  For updates, check out www.facebook.com/evolettmusic.

*More dates to be announced soon.