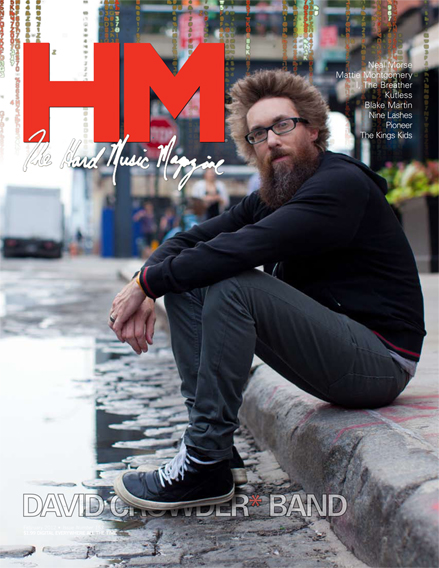 David Crowder Teams Up with K-LOVE for
Four Sold Out Shows,
Collecting More Than 53,000 Pounds of Food
for the Souper Bowl of Caring
More than 10,000 People Attend
Four Market Concert Stretch
Just two weeks after his chart-topping final album was released, David Crowder embarked on a promotional trip with K-LOVE Radio supporting the efforts of the Souper Bowl of Caring. Souper Bowl of Caring is a national movement of young people working to fight hunger and poverty in their own communities around the time of the Super Bowl football game. More than 10,000 people were involved in the four-day stretch of sold out shows in multiple cities across the country where over 53,000 pounds of food was given to support the cause.
sixstepsrecords and K-LOVE teamed up to bring Crowder and the new K-LOVE morning show, Craig, Amy and Kankelfritz, to Charlotte, N.C., Knoxville, Tenn., Memphis, Tenn. and Indianapolis, Ind. last week. The purpose was to help fight hunger and poverty by creating awareness and supporting the local food drive efforts of Souper Bowl of Caring. Following a live, network broadcast in each city, with the partnership of local host churches, Crowder performed an evening acoustic concert where admission was a non-perishable food item, donated to a local food pantry connected to the Souper Bowl of Caring.
David Crowder*Band’s final record, Give Us Rest (A Requiem Mass in C [The Happiest of All Keys]) sold over 50,000 copies in its first week making it the No. 2 record in the country behind Adele’s 21, and the No. 1 new album on the charts. With a nearly constant No. 1 hold on the iTunes ® Overall Albums chart, Give Us Rest offered David Crowder*Band the highest chart and sales debut of their over decade-long career.
# # #
About David Crowder*Band:
Named among the “most thoughtful, progressive and exciting acts in contemporary Christian music” by The New York Times, the popular yet unconventional David Crowder*Band unveiled their final collection of new music on January 10 with the release of Give Us Rest or (a requiem mass in c [the happiest of all keys]). As the follow-up to the GRAMMY ® nominated Church Music, Give Us Rest gave the band the highest debut of their career selling over 50,0000 units in one week, landing them in the No. 2 spot on the Billboard Top 200. David Crowder*Band’s music video for “SMS (Shine)” nabbed coverage on NBC’s The Today Show, Fox & Friends, USA Today, Billboard and Paste Magazine online as well as a GMA Dove Award win for “Short Form Video of the Year.” The video was also recognized at the LA Film Festival in 2011. Along with the group’s 9 GMA Dove Awards and 22 nominations, the band was the first Christian artist to be named MSN.com’s Artist of the Year in 2006. The band is part of the Passion Movement, participating in university student gatherings in the US and around the world. The group’s leader David Crowder is further an acclaimed author, having penned two books, including his acclaimed, highly personal, Everybody Wants to Go to Heaven, But Nobody Wants to Die: Or (The Eschatology of Bluegrass). David Crowder*Band debuted their first Christmas album, Oh For Joy, in October of 2011.
About sixstepsrecords:
Founded in 2000 by Louie Giglio, sixstepsrecords is a worship label and a division of Passion Conferences. sixstepsrecords’ artists include Chris Tomlin (How Great Is Our God: The Essential Collection) David Crowder*Band (Give Us Rest), Charlie Hall (The Rising), Matt Redman (10,000 Reasons), Christy Nockels (Life Light Up), Kristian Stanfill (Mountains Move) and Passion (Passion: White Flag). The label partners with Sparrow Records/EMI CMG Label Group for A&R, marketing, sales and distribution operations.
About EMI CMG Label Group:
Brentwood, Tennessee-based EMI CMG Label Group is comprised of Sparrow Records, Forefront Records, and Credential Recordings, in addition to providing A&R and marketing support for sixstepsrecords via a joint venture and licensing partnership. Balancing freedom, discipline, creativity, profitability and ministry, EMI CMG Label Group strives for excellence in artist development.  The Label Group is a division of EMI Christian Music Group.  For further information, please visit  www.emicmg.com.