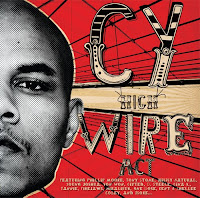 High Wire Act is set to drop locally on March 10, 2011 with a combination birthday/release party. But before then, CY is whetting appetites with a free, 31 track greatest hits-style compilation titled As the World Turns: The Best of CY. This collection encompasses tracks from all of CY’s previous releases, various other projects, and even a few sneak previews of the upcoming High Wire Act album.

As the World Turns is being offered as a free, digital release in partnership with 3HP Records. The compilation was downloaded over 2,100 times on the first day it was posted and is rapidly approaching the 10,000 downloads mark (all within the first five days.)

“I thought the compilation was a good way to give back to my fans to let them hear some of their favorite CY songs, catch up on some they might have missed, and to let them sample a few tracks from the new album,” CY said. “I’m excited that so many people have grabbed it and pray that momentum continues once High Wire Act drops.”

After launching the Circus World Event…The Ringleader album at the 2007 Texas Holy Hip Hop Achievement Awards (where MTV personality Sway was a presenter) to critical acclaim, CY began to pray about the direction of its much anticipated follow-up.

Whereas The Ringleader’s concept envisioned our world as a circus with one true ringleader (God) and an imposter (Satan) who plots and schemes for the same position, High Wire Act plays off a tight rope metaphor that represents the narrow road believers in Christ must walk in order to receive eternal life. The project also carries other messages about the humility that must be maintained by those placed in lofty positions.

High Wire Act will be available nationally through brick-and-mortar and digital channels thanks to CY’s new partnership with CLG Distribution. Fans may also pre-order the release through the artist’s recently revamped website: dasouth.com/complex

Finally, you can catch CY’s eye-popping stage presentation in support of High Wire Act at either South Carolina’s M.O.S.T. Tour or as part of this summer’s 7 Chosen Tour in nine different states throughout United States and Canada.