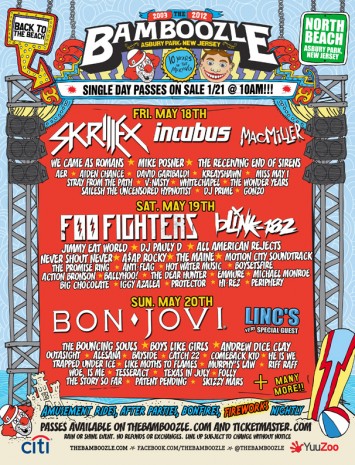 THE BAMBOOZLE 2012 ANNOUNCES ADDITIONAL PERFORMERS AND UNVEILS DAILY LINEUP FOR ITS 10TH ANNIVERSARY CELEBRATION ON THE BEACH AND BOARDWALK AT NORTH BEACH ASBURY PARK, NEW JERSEY ON MAY 18-19 & 20

OVER 60 PERFORMERS ADDED TO THE FESTIVAL LINEUP INCLUDING:

(New York, NY- January 18, 2012­) — The Bamboozle, the annual three-day music and pop culture extravaganza, has announced over sixty additional performers and the daily schedule as it celebrates its 10th anniversary at North Beach Asbury Park, New Jersey, May 18, 19, and 20.

The Bamboozle, presented by Live Nation, will return to the beach at Asbury Park for the first time since 2005 and feature over 100 acts performing on nine stages spread throughout the beach and boardwalk including the renowned Convention Hall.

The Bamboozle, one of the East Coast’s oldest and largest music festivals, has consistently delivered an exciting one-of-a-kind experience for its fans by showcasing some of today’s hottest talent and, in keeping with that tradition, an exceptional lineup is planned this year.

Headlining on Friday for the opening night of the festival are Skrillex and Incubus, as well as performances from Mac Miller, Mike Posner, Kreayshawn, We Came As Romans, and others.

The closing day of the festival will feature headliners, Bon Jovi and performances from Andrew Dice Clay, Boys Like Girls, Bayside, Bouncing Souls, Alesana, and others, plus the annual Linc’s very special guest, which will be revealed soon.

In addition to performances, The B-Boy Arena, a breakdancing battle, which made its debut during last year’s Bamboozle, will return with twelve of the top B-Boys in the world competing for a grand prize, which is the largest cash prize to ever be awarded for an underground dance competition in the United States.

Additional performers will be announced for The Bamboozle as well as more information on The Bamboozle Roadshow 2012. For a complete list of current scheduled performers and the daily festival lineup, please visit: www.thebamboozle.com. (SEE ATTACHED JPEG)

Three-day passes are currently available for purchase and single day passes will go on sale Saturday, January 21 at 10:00 AM EDT. For more information please visit: www.thebamboozle.com. Citi® cardmembers will have access to presale tickets beginning today at 10:00 AM local time through Friday 10:00 PM local time through Citi’s Private Pass® Program. For complete presale details visit www.citiprivatepass.com. Citi® is the official credit card of The Bamboozle.