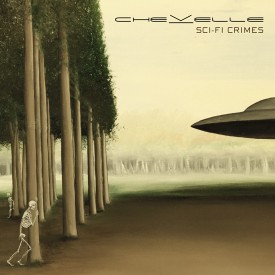 Chevelle’s first single from their new album “Jars” is well on is way to becoming one of the band’s biggest hits ever.  The song is currently at #15 on the modern rock chart and #6 at Active Rock. The band has also just completed their video for the single, which will have two different endings. You can catch the debut of “Jars” Version 1 on MTV 2 and MTVU on August 25th, and “Jars” Version 2 on Yahoo.com on August 26th.

Sci-Fi Crimes is the follow up 2007’s smash album Vena Sera. The Chicago-based trio spent seven weeks co-producing Sci-Fi Crimes with Brian Virtue (Jane’s Addiction, 30 Seconds to Mars, Deftones) in Nashville, Tennessee.
Formed in 1995, the Chicago-based band has remained a staple in the rock scene with six Top 5 Modern Rock hits under their belt, including the #1 songs “Send the Pain Below” and “Vitamin R (Leading Us Along)” as well as fan favorites, “The Red” and “The Clincher”. The band is made up of Pete Loeffler (vocals, guitars), brother Sam Loeffler (drums), and brother-in-law Dean Bernardini (bass).

Chevelle’s new album is the work of a band taking stock of itself after a strenuous decade of recording and touring (“Weird to think we’re a ‘veteran’ band; I’m kind of shocked by how long we’ve been going,” Pete muses) and, especially, a blistering tour schedule behind Vena Sera.

Too often lumped into the “just another hard rock band” ghetto, Chevelle emerges with Sci-Fi Crimes as an admittedly heavy-sounding group whose wit and intelligence now stand fully revealed.