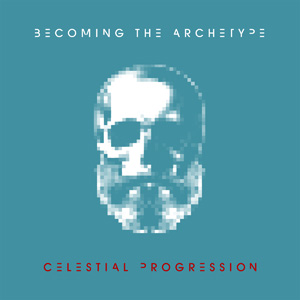 After raising eyebrows and blowing minds with their brutally inventive 2011 tour de force Celestial Completion, Atlanta, Georgia metallurgists BECOMING THE ARCHETYPE are prolonging the magic with the release of a digital-only remix EP, Celestial Progression, out April 17 on Solid State Records.

Crafted by Nashville electronica collective Born of Water and Chicago producer Giant Robot (who also contributed sitar to Celestial Completion), the six-song EP finds BECOMING THE ARCHETYPE once again defying expectations and stretching the boundaries of metal music with a challenging and rewarding set of remixes that range from adrenaline-pumping to industrial to atmospheric.
Listen to ‘Breathing Liquid (Born of Water Remix)’
listn.to/becomingthearchetype

“I’ve been a fan of good remixes of heavy music for a long time,” says BECOMING THE ARCHETYPE guitarist Seth Hecox. “The great thing is that I told these guys to make the songs their own thing, and that’s exactly what they did. Each remix sounds like its own song and each remix is very exciting to listen to, bringing out a different emotion.”
“I’ve fallen in love with these six tracks and I know everyone who buys this album will too,” Hecox adds. “Any fan of Celestial Completion is going to be blown away and adore what these remixes bring out of their originals.”
With their fourth full-length album, 2011’s Celestial Completion, BECOMING THE ARCHETYPE took wildly ferocious metal and pushed it to its breaking point. There are horns. There is Middle Eastern sitar. There is a choir of sopranos. There are haunting piano dirges. Safe, paint-by-numbers metal it was not. Highwire Daze called the album “nothing short of a masterpiece, while Metal Hammer praised the band’s “massive songs, massive ideas and a massive array of instruments,” while calling BECOMING THE ARCHETYPE “the cleverest band ever to use death metal as a reference point and add a brass section.”

Select praise for Celestial Completion:
“[Celestial Completion] showcases massive songs, massive ideas and a massive array of instruments… The cleverest band ever to use death metal as a reference point and add a brass section” –Metal Hammer
“Nothing short of a masterpiece. A tour de force from a band on the verge of greatness… Simply stated, Celestial Completion by BECOMING THE ARCHETYPE is the most staggering, thoroughly imaginative album to ever be unleashed from the venerable Solid State label. (4/5)” -Highwire Daze

“BECOMING THE ARCHETYPE have created the soundtrack for the coming apocalypse… A perfect album. (5/5)” -Kik Axe Music
“BECOMING THE ARCHETYPE is nothing if not bold, and the four members of the band have proven time and again that they are vastly underrated composers… They have more raw talent than almost all of their peers and even eclipse some of their primary influences.” -Metal Insider
“BECOMING THE ARCHETYPE has quickly emerged as the epitome of growth and potential in modern metal… Nothing should keep this band from reaching stardom.(4/5)” -Metal Riot
“A spectacular listen… BECOMING THE ARCHETYPE has created an album full of depth and beauty as well as an album full of passionate heaviness (4/5)” – The New Review
“Celestial Completion takes death metal to heights not often ventured, making it all the more valuable and unique. (9/10)” -Lexington Music Press
“It’s obvious

BECOMING THE ARCHETYPE have put a lot of hard work and dedication into allowing each track to reach its full potential… these guys are immensely talented. (4/5)” -Heavy Blog Is Heavy

“Celestial Completion could very well turn out to be Become The Archetype’s magnum opus unless they somehow find a way to top it in the next release. For now, however, it shall remain their most broad and accomplished work. (9/10)” -Under the Gun Review

“Celestial Completion covers the entire spectrum of musical stylings, a wide array of instruments both acoustic and electronic, and blends them all together flawlessly and dauntlessly… Epic!” -Hopecore